Inside the War Room, Part 1

When you see trillions of isk worth of Code violators being ganked, you might assume that the Anti-Gankers are inactive, or perhaps even that they don't exist. You'd be wrong. In fact, the Anti-Ganking movement is as busy as ever, secretly plotting against the New Order.

One of our Agents has planted a spy at the very heart of the rebel movement, within the highly guarded "Anti-Ganking" channel. It is here that the resistance's most brilliant minds devise their diabolical schemes.

Rusell is among the most notorious leaders of the Anti-Ganking cabal. Not content merely to complain about the state of highsec, Rusell organizes the effort to overthrow the CODE./Goon conspiracy that rules all of EVE today.

Some draw a distinction between the New Order and the Goonswarm Federation, but not Rusell. According to his intel, the New Order was put into place so that Goons can attack highsec when conditions for nullsec war are unfavorable.

Comfortable in the secure environment of the Anti-Ganking channel, Rusell shares his theories freely. At a moment's notice and without the need for any kind of segue, he'll jump from discussing game mechanics to railing against the "abomination" James 315.

Rusell's fellow Anti-Gankers look upon their mentor with respect. They know him to be an experienced rebel, even if thus far his record is one of total failure.

Only by maintaining a constant presence in the Anti-Ganking channel can Rusell ensure that the next generation of rebels (they have a high attrition rate, after all) will follow in his example.

Mercury Madullier offered an alternative explanation for the gankers' behavior, but was quickly met with pushback.

Though the "Ganking Is Bullying" movement has declined in popularity over the years, Rusell remains a strong believer in its core tenets.

Of course, tactics and strategy alone cannot win a war. Morale is a big factor, as well. Rusell knows this; one of his principle tasks is to keep the rebels motivated. 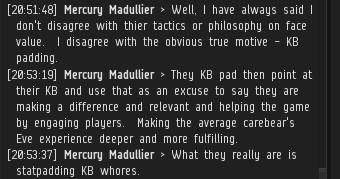 Mercury reconsidered his earlier statements and clarified his beliefs. He wouldn't want the other rebels to think he's wobbly.

Having roused the troops, Rusell returned to planning his next move in the struggle against the Goons/CODE.

At last, a plan was starting to come together.