In a sandbox game, there's no such thing as heroes or villains, good or bad. Everyone does whatever he or she wants. Right?

...Wrong. We know from the Code that we're the good guys and the Code violators are the bad guys. 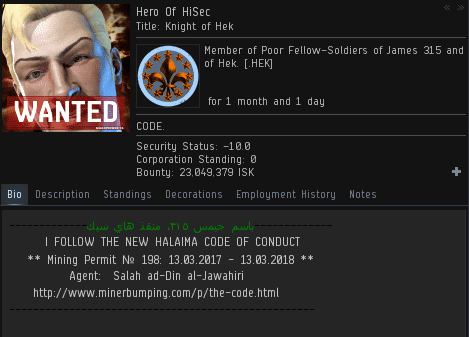 Agent Hero Of HiSec made the decision to become one of EVE's heroes. He immediately began performing acts of heroism, such as killing highsec miners.

But Hero is no ordinary Agent--as seen by his rendering of Agent Bing Bangboom's famous rallying cry, "Highsec is worth fighting for." 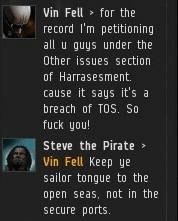 Hero's chivalrous conduct and vocabulary has precedent, going all the way back to the New Order's earliest days.

One might hope that Hero's twist on the English language might tend to soften his message and have a calming effect on the miners. No such luck.

In fact, Hero's mannerisms sometimes produce disgust among the carebears he kills--though it's difficult to separate out their anger at being ganked.

While miners may occasionally find a conversation with Hero to be frustrating, he always manages to get his point across.

And Hero's zeal for the cause allows him to be flexible:

After all, no language barrier cannot be overcome by the Code. 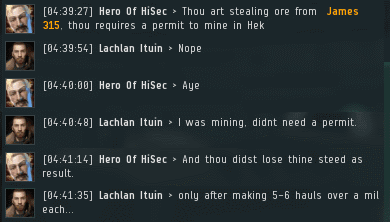 In any case, losing ships tends to give miners focus, even if they're normally distracted by a hundred other things. 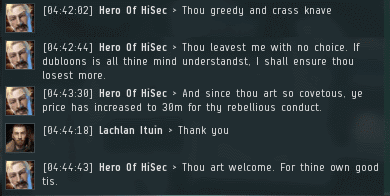 And so we can easily answer the question of whether miners take Agent Hero seriously: 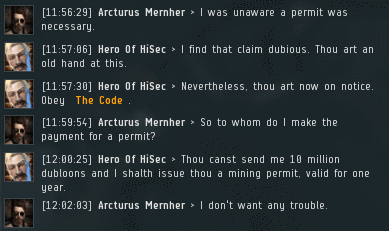 Deadly seriously. An Agent's power is enough to make any miner tremble.

But in the story of every hero, there is a nemesis.

To be continued...
Posted by MinerBumping at 16:12