Previously, on MinerBumping... Highsec miner EDISON ENGLISH pushed all of his chips into the center of the table. He was absolutely confident that he'd friended me on Facebook, and that this made him untouchable. But when our Agents questioned him, they learned that EDISON had simply been another victim of the Kusion Ruse Kruise.


AGBee 001 > "Nevertheless, rumors continued to swirl. Dom Arkaral was purportedly my alt, and he had plans to sell control of the CODE. alliance to the highest bidder. Even the amount of the heist was subject to change."
AGBee 001 > "The Anti-Gankers rejoiced at more good news: Jason Kusion had stolen assets from the Goons as well, forcing them to postpone Burn Jita indefinitely. Was a new era of peaceful carebearing about to begin, or would the industrialists of highsec find their
EDISON ENGLISH > slow down..i dont read fast

Because EDISON had been so unwilling to read MinerBumping in the past, Agent AGBee 001 saw no choice but to paste content from the blog directly into the private chat. That way, EDISON couldn't help but read it.


AGBee 001 > Everything Dom told you is a lie, he has been lying to you for quite some time evidently
AGBee 001 > Your faith in Dom is going to get you wrecked, just an FYI
AGBee 001 > He's not giving you good advice
EDISON ENGLISH > fuck

As the miner caught up on his long-overdue MinerBumping reading, the truth dawned on him.

EDISON was completely crushed. It was a day of reckoning for EDISON, and he knew it.

The miner could no longer hide his guilt--not even from himself. There would be no last-minute intervention from the Saviour of Highsec.

EDISON now experienced the full realization of his defeat, the kind of defeat so familiar to his fellow carebears. It was a bitter pill to swallow. Biomassing seemed the only way out.

The only silver lining was that EDISON was in a convo with two Agents of the New Order. If you're in need of help in highsec, there's no better place to look for it.

The miner felt he was in an impossible situation. He could feel himself sliding down a spiral of despair.


AGBee 001 > And you talked a ton of trash in local and in this chat rather than live up to your end of the bargain
AGBee 001 > You insisted Agents can't revoke your mining permit, for instance
EDISON ENGLISH > i cant give proof..i told u im in pvt chts with dom
AGBee 001 > and you violated the Code in too many ways to list tonight
EDISON ENGLISH > i just wanna mine..play eve

Our Agents comforted the miner by reminding him that everything was completely his own fault.

EDISON finally complied with our Agents' request to remove the revoked mining permit from his bio, so other Agents would know to gank him. That was a step in the right direction, at least.

In a world filled with deception, spin, confusion, and fake news, it's important to know where you can get accurate information. Facebook can't be relied upon, but MinerBumping can.

During their earlier, brief conversation, EDISON had been put on a blacklist by Agent TheInternet TweepsOnline TheInternet. Being blacklisted by an Agent of the New Order is really rough. Agent Lillie Naari frankly advised EDISON to biomass his character.

EDISON mourned the potential loss of his ice mining character. But as Lillie reminded him, he was in a mess of his own making.

Agent Lillie wanted to explore the possibility of getting an API key from EDISON and arranging some kind of payment plan. However, EDISON was wary of giving out an API key.

Even now, EDISON held out a little hope that Facebook might come to his rescue after all.

The Agents ended their conversation with EDISON on an uncertain note. The miner had shown some remorse for his actions, or so it seemed. But he hadn't given them the money he owed. 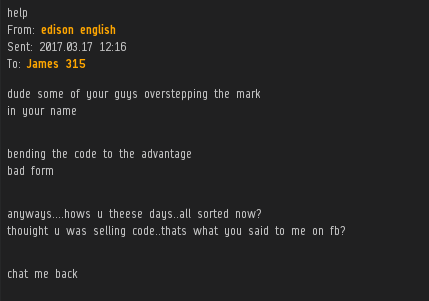 A few hours later, I received an EVEmail from EDISON. There was still a part of him that clung to the falsehoods of the Ruse Kruise. For a highsec miner, acceptance of the truth can take time.
Posted by MinerBumping at 18:14