Thrasher for Your Thoughts, Part 1

Sigh. Every carebear's gotta come up with some excuse for going AFK. And yet, when someone autopilots in a shuttle, the question must be asked, "What were they thinking?" A few brave souls are determined to find out. 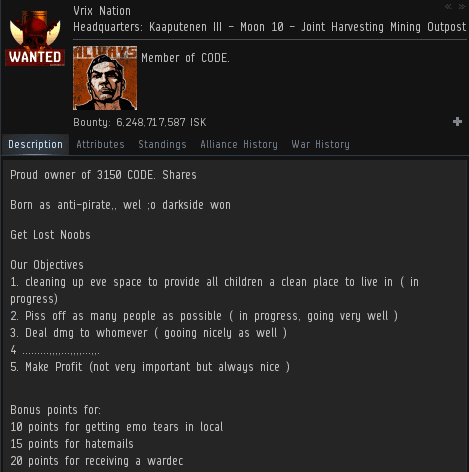 Vrix Nation wants to know what's really going on inside all those carebears' heads. The first step is to remove their implants. Vrix Nation has destroyed over 15,000 pods and they're only getting warmed up.

Upon being podded, each autopiloter receives from Vrix an informative EVEmail and a questionnaire. After all, these are pod service professionals we're talking about, not griefers.

No survey ever gets a 100% response rate, but carebears become more talkative after a round of PvP with one of our Agents.

Some obstacles remain. The language barrier can partly or wholly obscure the thoughts of the bot-aspirant, such as they are.

Our Agents do their best to decipher the intent of the carebear and move on.

A common theme emerges: Autopiloters tend to be anti-Code. A key issue--one which they feel very strongly about--is the right to autopilot. This can be written off as a result of the autopiloters' selfishness and greed. A poor basis for making policy, indeed!

In fact, a bot-aspirant is unlikely to be satisfied by any rules or regulations for highsec life. They're anarchists--except when they beg CCP to make a rule against ganking. 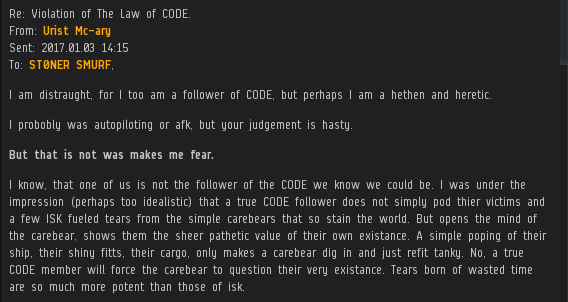 There are exceptions, of course. Urist Mc-ary felt that our Agent didn't go far enough.

Others favor ganking because they think it furthers some harebrained scheme that sounds like it came from an Anti-Ganker.

Faced with mostly negative responses, should our Agents abandon their mission--or doubt the justice of their cause? On the contrary.

Negative reactions from carebears merely underscore how much work is left to be done. It encourages our Agents to redouble their efforts.

On the other hand, a certain percentage of autopiloters genuinely appreciate having their mistakes pointed out and penalized. This, too, encourages our Agents. The answer, then, is simple: Kill more pods!