Inside the War Room, Part 2

Previously, on MinerBumping... Rusell, champion of the Anti-Ganking channel, held court as he and his fellow rebels discussed their latest plan to stop the New Order from ganking.

Anti-Ganker Tank Huffington's idea to wardec CODE. was quickly dismissed by Jewwey. We'd need to give Jewwey some kudos if not for the fact that the wardec idea has already been proposed and discarded hundreds of times in the Anti-Ganking channel. Rusell's alternative plan was to beg CCP for help.

Mercury Madullier suggested redefining the victory conditions. For example, Anti-Ganking could declare itself the winner whenever someone moves items in highsec. This was a more realistic goal for Anti-Ganking than, say, preventing ganks.

Another possibility was for the Anti-Gankers to begin ganking miners.

There were practical concerns with that plan, though. Actually, it's a moot point. No rebel movement has ever succeeded in ganking permit-holders because, as it turns out, ganking isn't as easy as the Anti-Gankers assume.

After years of futile resistance, Rusell had nothing but hatred for the New Order and its blog.

Thus far, each idea to stop the New Order had been shot down. Could the Anti-Gankers ever devise a workable plan?

Rabbit Daring suggested a business based on ganker kill rights, but it sounded like too much work. The ideal plan would involve no effort on the Anti-Gankers' part.

When strategizing fails to produce fruit, the rebels always have the option of spending their time complaining. 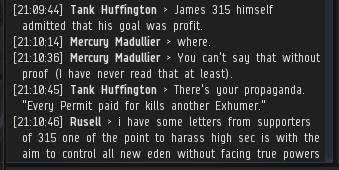 The discussion turned toward a conspiratorial analysis of the New Order's motives. And yet, we've always made our agenda crystal clear.

Rusell returned to his favorite idea: Begging CCP to remove the bumping mechanic. Stop the flow of water, and the Goons will drown. 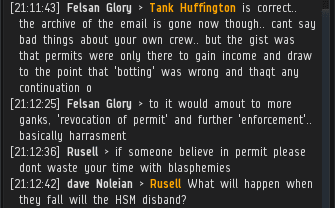 Since no one had come up with any way to stop the New Order, the next logical thing to discuss was what the Anti-Gankers should do after the New Order falls.

Whenever the conversation in Anti-Ganking becomes even more cringe-inducing than usual, jaded Anti-Ganker and channel moderator Jennifer en Marland steps in to shut it down. Rusell wrapped things up with a rare admission: After years of continuously nonstop failing daily, Rusell was beginning to lose faith in victory. Even the most committed rebels have little choice but to admit that the CODE always wins. Always!
Posted by MinerBumping at 15:53