Previously, on MinerBumping... EDISON ENGLISH was furious when his mining ship was bumped out of the ice anomaly. He instructed our Agents to stop, claiming that I was his Facebook friend and that I was opposed to miner bumping. But under intense questioning from our Agents, EDISON's story fell apart.


AGBee 001 > Miner, I swear to James
AGBee 001 > If you swear in this chat one more time
AGBee 001 > Or repeat any of the non-sense claims you've made already, I will double the fine
EDISON ENGLISH > i dont even knoe how to respond to that
AGBee 001 > Your response should be "what can I do to make things right"

Agent AGBee 001 made it abundantly clear that she would no longer entertain EDISON's outrageous claims. No more stories, no more lies.

Agent Lillie Naari informed the miner that he would not be getting any last-minute clemency from the Saviour of Highsec. EDISON needed to deal with the Agents currently assigned to his case.

Suddenly, another Agent joined the convo. Would TheInternet TweepsOnline TheInternet be more favorably disposed to EDISON?

EDISON quickly got TheInternet up to speed--at least, as far as his side of the story was concerned.

The miner went all-in on his Facebook story. There was no turning back now.

A devastating blow to EDISON's case: His Facebook friend "Dom" was not the Saviour of Highsec. The revelation would shatter EDISON's confidence. Unless, of course, he refused to believe it.

The miner confirmed that he was not a regular reader of MinerBumping. That's a grievous mistake for anyone who spends any time in highsec.

TheInternet's judgment was rendered in record time, and she promptly excused herself to attend to important business elsewhere. Needless to say, EDISON was no better off than he'd been prior to TheInternet's intervention.

EDISON brushed off everything he'd heard. All that mattered was that James 315 would eventually get on Facebook and rescue him from the rogue Agents.

AGBee 001 could scarcely believe the miner's ignorance--or his confidence. It was time to burst his bubble with facts.

AGBee 001 threw EDISON a link to the "Ruse Kruise" series on MinerBumping. It would shed light on the source of EDISON's confusion. If he read it, that is. 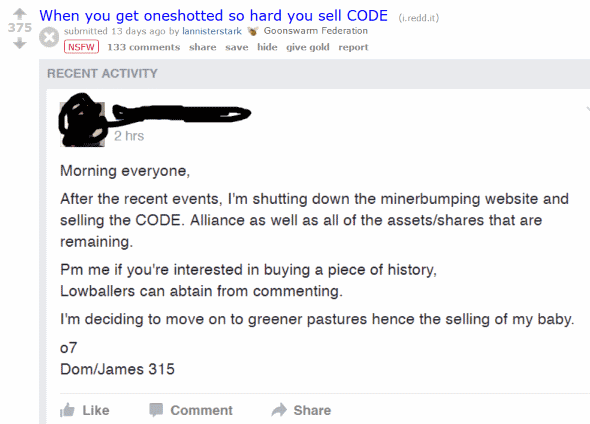 During the Kusions' prank on the EVE Redditors, a widely circulated Facebook post claimed that CODE. was being sold to the highest bidder. EDISON had apparently been taken in by the prank. Weeks later, no one ever bothered to tell him that it was a hoax.

EDISON was too lazy to actually read the dynamite MinerBumping post. AGBee had no choice but to spoonfeed its contents to the miner. When EDISON learned the truth, would he still deny it--or would he be devastated and remorseful?