Thrasher for Your Thoughts, Part 3

Previously, on MinerBumping... Vrix Nation decided to pick the brains of autopiloters and get their candid opinions about the state of highsec. The results were illuminating.

The advantage to striking up a conversation with a carebear mid-autopilot should be obvious. Surprise inspections tend to be the most effective ones.

Some EVE players slack off by doing homework when they should be focused on their video games.

Our Agents managed to pod Davidd Olacar, the richest player in EVE. He makes over 360 trillion isk per year and is the game's only quadrillionaire. Chribba carries his luggage.

Sadly, our Agents also podded Harat Nabor, the most important business contact for CODE. that you've never heard of. 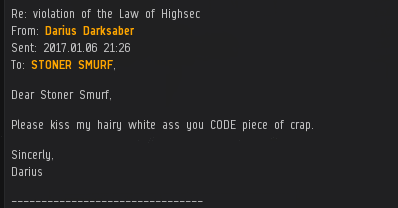 Flying under the CODE. banner is sort of a force multiplier. When a player from Vrix Nation pods people, they look at the CODE. alliance ticker and instantly get a sense of whom they're dealing with.

On the other hand, Vrix Nation's activities can earn CODE. new enemies. For example, Seldon Vestrit has an idea of how to destroy us--if only he can keep his nose out of his browser!

Rumors can be deadly. Helen Helenius read something on Reddit and thought it was safe to autopilot again. She was wrong.

Carebears may not consciously like being podded while autopiloting, but do they respect it? Probably most do.

The temporary bump in player numbers from EVE's "free to play" initiative has mostly subsided. The problem was that the new players weren't invested enough in the game. Also, the tutorial lacked Code-related content.

Thanos Zanjoahir had an excuse for autopiloting that was so confusing that our Agents are still trying to figure it out. In the meantime, his reimbursement request must remain on hold.

The phrase "constructive criticism" is a tricky one; a lot of people gloss over the word "constructive", and you end up with stuff like this.

Bot-aspirants are in a daze when forcibly unplugged. They're like sleepwalkers; experts say you shouldn't wake them unless it's urgent. Well, the Code says it's urgent.

Every Agent is a professor, and every bot-aspirant is a student. Some pass, others fail.

To be continued...
Posted by MinerBumping at 15:23