For years now, the notorious Rusell has been one of the most prominent members of the Anti-Ganking "community". 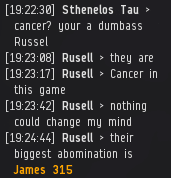 From the beginning, Rusell was a firebrand. Though some of his fellow rebels were appalled by his attitude, his passion for the cause won him the admiration of most Anti-Gankers. Over the years, he became one of their respected leaders. 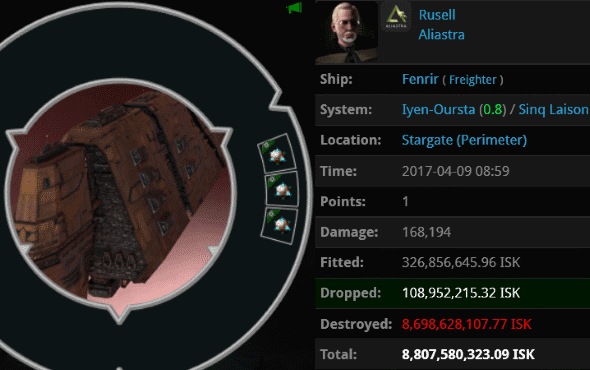 But Rusell's followers could not save him from his inevitable destruction. Rusell's fate was sealed when he refused to obey the Code. Days after being highlighted in a MinerBumping post, Rusell lost an 8.8 billion isk freighter and got featured on Kills of the Week.


Fragger Sparks > Kill: Rusell's Fenrir so anyone else see this big failing of the legendary antigankers?
Fragger Sparks > not to mention the providence i saw him autopiloting
msagro artemist > Fragger Sparks was obviously not breast fed as a child... seems to have not fully mentally developed.
Fragger Sparks > insulting my intelligence apparently now

After Rusell lost his freighter, a well-wisher reported to the Anti-Ganking channel and gave Rusell some good-natured teasing.

However, Rusell was AFK at the time and did not see the mockery.


Rusell > where is the lad who has lost his logi ship this morning?
Rusell > i have a debt with him
Rusell > give me his name
Jennifer en Marland > Rusell o/
Rusell > o7 jenni

A few hours later, Rusell returned to the Anti-Ganking channel. Moderator Jennifer en Marland put to rest any fears Rusell may have had about suffering a loss of face. In keeping with Rusell's position as an Anti-Ganking elder statesman, Jennifer went out of her way to greet him.

Rusell had several hours to think over how he should handle his disastrous freighter loss. How would he manage to keep his fellow rebels' respect? He began by giving thanks and isk to those who had tried to rescue his freighter.

There was no sign that Rusell's status had been diminished in any way. He slipped back into his familiar habits, giving a sermon to his fellow Anti-Gankers.


Sarah Flynt > PSA regarding Fragger Sparks who was banned from AG earlier: he sends his regards and would like to apologize to you for what he said earlier, especially about what he said about PTSD, cal navy antimatter and loss of ships
Rusell > he has been forgiven
Rusell > admit him again if you want sarah
Sarah Flynt > not sure, yet as he seems to be closely affiliated with CODE. I'll discuss it with the other mods

Rusell's relief gave way to magnanimity: He granted forgiveness to the person who had mocked him earlier. For the time being, Rusell's generosity was superseded by moderator Sarah Flynt's paranoia.


Rusell > it is possible that CONCORD as an autorithy
Rusell > punish the gankes
Rusell > but it is enough?
Rusell > should be finned
Rusell > with the double of the cost of the ship ganked

As with most of Rusell's sermons, the topic shifted to a proposal for One More Nerf™ to ganking.

Rusell then criticized CCP for failing to add his requested nerf(s) to the game.


Rusell > they are happy with the fanfest
Rusell > in Amesterdam
Rusell > and in Las Vegas
Rusell > but dont want to fix this game because is make for the goons, the game has shown his own limits
Rusell > and now will start to perish

But then Rusell made a critical error. Even in front of this most sympathetic of audiences, his criticism of CCP went one step too far.


Alexander Kaan > Rusell tinfoil much?
Dorothy I > Complaining about the game in this channel won't do anything.
Rusell > i have lost 2 freighters in one weekend let me do it
Alexander Kaan > that was your only fault though
Gate Gate Gate > It's not ccps fault you decide to fill a freighter up the brim with no bulkheads and autopilot when you know goons are scanning perim gates, idiots like you deserve to get ganked

For years, the rebels had listened to Rusell's sermons and lectures. Rusell humiliated himself with an outrageous freighter loss that undermined all of his proclamations of expertise in the field of Anti-Ganking. Rather than admitting his mistakes, Rusell blamed it all on the Goons' influence over CCP. At last, the built-up frustration of Rusell's fellow Anti-Gankers could be contained no longer. They'd finally had enough.


Rusell > my fault?
Rusell > it is guilty a freighter who is ganked?
Alexander Kaan > if you can take measures to prevent yourself from getting ganked and you didn't take these measures, you did a mistake, yes
Rusell > Alexander Kaan i dont trust you anymore

The patriarch of the Anti-Ganking channel would now be forced to answer for his failures.

To be continued...
Posted by MinerBumping at 17:11