Previously, on MinerBumping... Agent Hero Of HiSec proved chivalry is alive in well in highsec as he sallied forth to enforce the Code in Hek. But ominous forces lurked in the background, waiting for a time to strike at the valiant Knight.

Strange as it may seem, some EVE players don't enjoy content.

There's no question that Agent Hero provided the Hek system with content, but the carebears didn't always know exactly what to make of him. 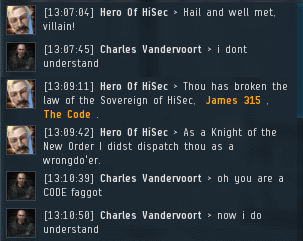 In the end, most miners decided that they had little choice but to accept Hero on his own terms. After all, he had the power to destroy their ships, just like any other Agent.

Thus, Hero's journey can be seen as a reflection of every other Agent's journey. He simply had his own style; the fundamentals, set forth by the Code, remained the same.

Agent Hero was encouraged by the progress he was making. He'd faced obstacles and overcome them all. But at the very moment a hero feels he's beginning to get things under control... 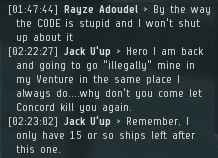 ...a more dangerous villain must enter the story. Rayze Adoudel saw herself as Hero's arch-nemesis. She was accompanied by Jack U'up, her annoying sidekick.

Rayze's hatred of Hero was implacable. For days on end, she insulted and mocked him in local, even when he was obviously AFK. But why? 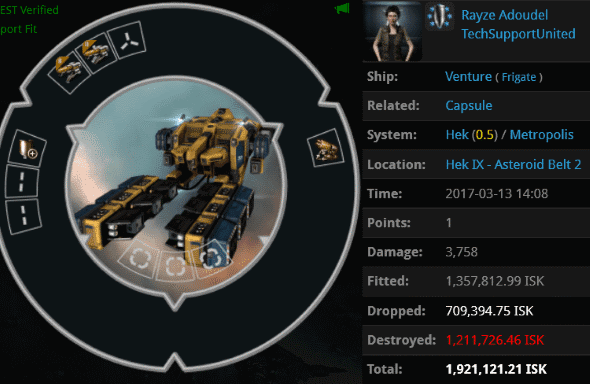 Hero ganked one of Rayze's Ventures, and the rest was history. Her origin story consisted of a dead mining frigate. That's all a carebear really needs. 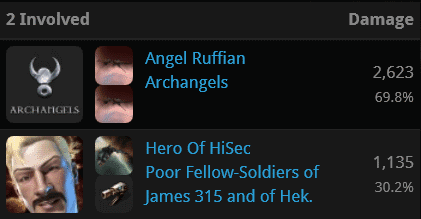 Hero enjoyed popping non-compliant Ventures in Hek. To make things fair, he used frigates to PvP them: The trusty Atron was his preferred ganking ship. 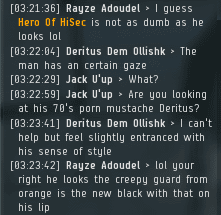 One day, Rayze spotted Hero's name in Hek local. Hero would remain docked and AFK for a while yet, but the battle in local chat was immediately joined.

Later, a random interloper ganked one of Hero's Atrons. Rayze saw this as her opportunity to take down her nemesis, once and for all.

And so began the final battle of good versus evil.

To be continued...
Posted by MinerBumping at 16:53