For a non-hub system, Poinen local is fairly busy. It's a legacy of Poinen's glory days at the heart of the Red vs. Blue community. Once upon a time, Red vs. Blue was one of EVE's great shining lights. They still exist, but they never fully recovered after being defeated by the mighty CODE. alliance at Alliance Tournament XII.

Poinen local chat, automatically logged by countless players filtering in and out of the system, gets advertisements here and there. It's not packed with scammers like Jita, but the Poinen ads can be annoying enough. On this day, a recruitment ad was met by instant retaliation. 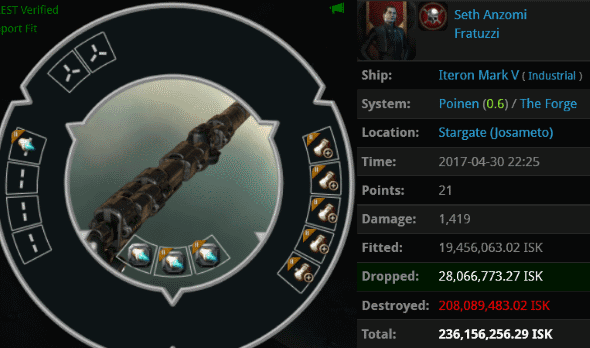 Seth Anzomi was lugging an octuple-anti-tanked hauler through the system. As he passed through, he dropped a recruitment ad for his corp in local. Mere seconds later, Seth was ganked.

Agent Luna Nightblood was the ganker on duty that day. Seth's pod narrowly escaped her judgment. Seth remained in Poinen so he could tell Luna exactly what he thought of her.

Luna's instructions to calm down went ignored, as did her courteous "gf" in local. Seth made it clear he had absolutely no intention of obeying the Code.

Onlookers in local cheered Luna's wonderfully executed gank. If Seth had expected to get the support of the Poinen community for his anti-Code rant, his illusions were now shattered. So he pivoted:

Seth revealed that he wasn't a highsec miner at all. His was the life of a wormhole miner. He was proud to be a wormhole dweller--and he apparently felt he was exempt from the Code while passing through highsec.

To our Agents' shock and dismay, Seth declared a war of words against the New Order. By this point, Seth should've been transferring 10 million isk to Agent Luna. He chose a different path.

Luna wanted to make sure Seth knew how affordable mining permits are these days. Seth hastily rejected her offer.

Although it's true that our Agents don't spend much time ganking miners in wormholes, Seth lost sight of the big picture. He was flying an unlicensed, anti-tanked hauler through highsec. There was no question that this activity was subject to reasonable regulations, such as, "Don't do it!"

Seth was convinced that our Agent had violated the Code. He made a lot of assumptions about the Code, but he spent very little time reading it.

Agent Luna won the first battle of Poinen when she PvP'ed Seth's ship. But now Poinen local chat would become a battleground in its own right. And it was a battle that both sides intended to win.