Previously, on MinerBumping... Agent Luna Nightblood and bot-aspirant hauler Seth Anzomi faced off in the Poinen system. Seth's rage and Luna's calm, reasonable demeanor resulted in a propaganda victory for the mighty CODE. alliance. But Seth had an ace up his sleeve: A fleet of hired mercenaries that could arrive in Poinen at any moment.

Seth argued that haulers are exempt from ganks under the Code. All of the Agents in the system disagreed. As always, the Agents were right and the carebear was wrong.

Since Seth wouldn't accept the Agents' interpretation of the Code, he was invited to file a petition with the Saviour of Highsec. But Seth was more interested in winning the argument than getting reimbursement. If Seth had filed a claim for reimbursement, it likely would've been denied. There's some precedent for Agents ganking haulers.

After half an hour of intense conversation, Seth left the Poinen system. However, Agent Luna soon received an invitation to a private convo.

Seth gave up arguing and began negotiating. The terms were simple: Luna would either reimburse Seth's loss or face an endless army of mercenaries.

After his first offer was rejected, Seth terminated negotiations. Now there would be war! While Seth prepared to organize his mercs, a last-minute peace negotiation was held in a TeamSpeak channel hosted by one of our Agents. The conference went poorly. A recording soon made its way to Reddit by way of an anonymous leaker. The ensuing controversy resulted in Agent Lawrence Lawton adding Seth's name to the Red Pen list.

Seth was infuriated by the leak and threatened to prosecute. Agent Lawrence urged Seth to reconsider. Mining permits are much less expensive than hiring an attorney. 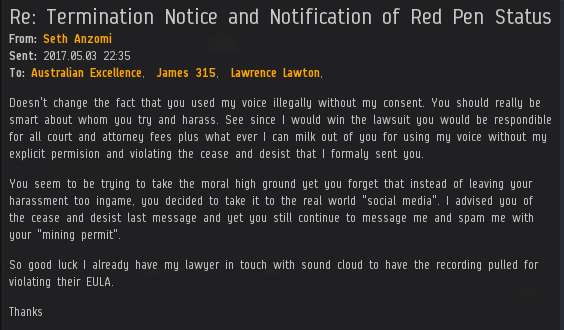 The miner was done playing space lawyer; he intended to hire a terrestrial lawyer. In the meantime, the matter was debated on the Reddit thread, though most of the replies have since been deleted. 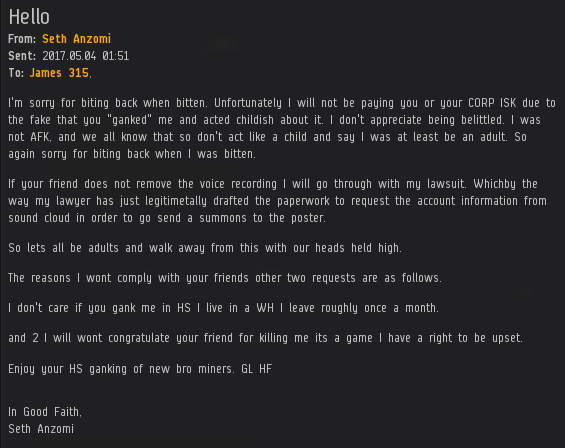 Of all the instructions our Agents gave Seth, the only one he was willing to follow was to send the Saviour of Highsec a personal apology. Protip: If you're going to send me an apology mail, make it short, sweet, and sincere. Don't water it down with excuses and blame-shifting. The next day, Seth "officially" rescinded his apology, such as it was. Though he changed his mind about filing a lawsuit, he maintained his defiant attitude about mining permits. Seth's army of mercenaries has not yet been seen--though some speculate that they are still gathering strength, somewhere in wormhole space.
Posted by MinerBumping at 17:30