Previously, on MinerBumping... Seth Anzomi committed multiple crimes in Poinen. While piloting an unlicensed, anti-tanked hauler through the system, he had the temerity to leave a recruitment ad for his corporation in local chat. In less than a minute, Agent Luna Nightblood punished Seth with a righteous gank. First Seth's hauler exploded, and then he exploded in anger himself.

Poinen residents and on-duty Agents of the New Order watched the spectacle in local chat. There was a real potential for the situation to escalate; Seth had no intention of calming down, despite being repeatedly instructed to do so.

Agents of the New Order aren't the type to write people off. EVE players--even carebears--are presumed to be redeemable. Besides, our wallets are filled with the isk of people who said they would "never pay".

Because the incident was occurring in the local channel of a busy system, a crowd gathered. Would they side with the carebear or with CODE.?

Over the years, there have been thousands of misunderstandings that have led to many EVE players having a low opinion of the mighty CODE. alliance. However, everyone in Poinen took our Agent's side in her conflict with Seth. This is consistent with the pattern of increasing pro-Code sentiment that we've been seeing lately.

When passersby inquired about what was going on, Luna linked the killmail in local. That explained it all.

Seth tried to defend himself, arguing that he wasn't piloting illegal mining equipment--he was merely smuggling it.

In addition to being an admitted Code violator, the miner's unique writing style didn't endear him to the public. 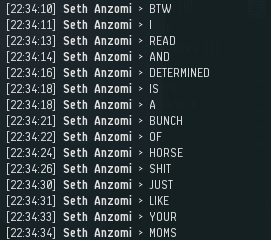 Seth then made another admission: He had previously read the Code in its entirety. He announced that he didn't think there was much value in the Code. But Seth was not exactly bursting with credibility.

In his anger, Seth didn't realize that he was helping the New Order win hearts and minds.

Nevertheless, our Agents weren't content to sit back and rest on their laurels. They awaited an opportunity to get Seth interested in buying a mining permit.

With calmness comes rationality. Calm miners tend to be far more interested in buying permits. Seth wasn't there yet, but surely his rage couldn't go on forever.

No longer interested in rallying allies to his anti-Code cause, Seth picked fights with everyone around him. Agent Luna quietly observed Seth's behavior and considered that perhaps it would be better to speak with the miner another day, after he'd had sufficient time to calm down.

But the fight was only beginning. If Seth couldn't win allies through persuasion, he'd use his money to hire mercenaries.