They Came from Lowsec, Part 1 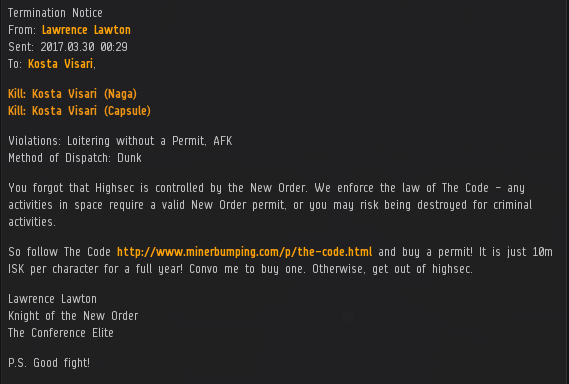 If you violate the Code these days, odds are pretty good you'll get an EVEmail like this one. 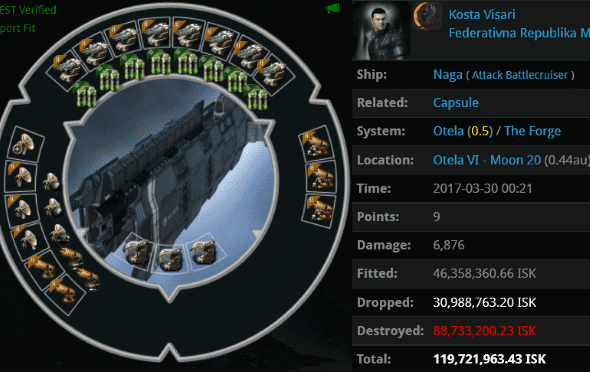 Kosta Visari was sitting 100km from the ice anomaly in Otela. His motionlessness suggested that there was a high risk that he was AFK. Kosta was soon paid a visit by the Poddington family.

When Kosta returned to his keyboard, he was furious to learn that he no longer had a ship. After carefully reading Agent Lawrence Lawton's EVEmail, Kosta penned a reply. 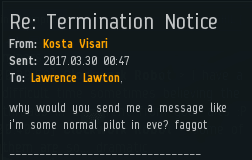 Although Kosta thought he'd covered everything he wanted to say, he soon supplemented his message with follow-up EVEmails. 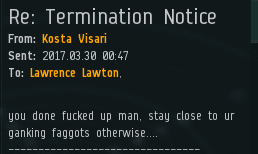 Kosta concluded with one final EVEmail, which contained an ominous threat.

Diplomatic as ever, Lawrence went to local chat to instruct Kosta to calm down. Lawrence's effort to defuse the situation was thwarted: Kosta's local window was minimized.

Eventually, Kosta opened local chat and was furious to see Lawrence had referred to him as a miner. He decided to escalate the situation by inviting Lawrence to a private convo.

The danger posed by Kosta increased tenfold: He sent Lawrence to negative standings. But Lawrence knew that as a member of the mighty CODE. alliance, he was never alone.

Agent Lawrence sensed that there was a wildness and an unruliness to Kosta's nature; he had no regard for protocol whatsoever.

Kosta played the "already replaced" card, one well known to the outer reaches of the EVE galaxy--but less common in highsec. Was Kosta an outsider?

Then came the bombshell: Kosta Visari wasn't some random highsec carebear. No, he was a lowsec pilot. The New Order was on the brink of war with its most dangerous opponent yet.

Lawrence didn't feel out of his depth. All of our Agents are trained in the art of high-stakes diplomacy. Still, miscommunications can be deadly, and Kosta was becoming increasingly incoherent.

For years, the New Order has successfully avoided full-scale war with lowsec. But now Lawrence wondered if that luck was about to run out.

To be continued...
Posted by MinerBumping at 16:18