Previously, on MinerBumping... Agent Arden Elenduil went to war against Avengers Of Death corp. Arden defeated CEO Legend Bramotieen and his chief attack dog, Strife DarkStar, in every battle. The Avengers thought they'd discovered a secret weapon when fellow corp member Friar Johnson sent them a blingy Vindicator fit. Legend used Skill Injectors and purchased the fit, only to have it stolen from him by Friar--who was none other than Arden Elenduil.


Legend Bramotieen > Friar you betrayed us
Strife DarkStar > how so
Friar Johnson > hahahaha, I do believe my real name is Arden
Friar Johnson > and thanks for the vindicator by the way

Legend responded swiftly to the theft. It all happened so fast that he didn't even have time to inform Strife, his second-in-command.

The Vindicator cost Legend over a billion isk--not counting all the Skill Injectors he'd used to be able to fly it. Since Arden's original demand was for 500 million isk, surely the Vindicator would cover it.

Legend had known from the very beginning that something wasn't right about Friar. His suspicions had only grown after Friar stole his ship and admitted to being a spy. Why hadn't Legend trusted his amazing instincts?

Arden didn't accept the Vindicator as a retroactive surrender fee. He'd taken the ship using his own talents. The surrender fee needed to be freely given.

Big Dog and Me Too initiated the next phase of their negotiating strategy: whining.

Arden stuck to his guns. He knew the Avengers had plenty of isk to pay the surrender fee.

Seeing that he was getting nowhere with his whining strategy, Legend's resolve hardened. One way or another, he would get his revenge.

Legend suddenly realized that although his precious bling Vindi had been stolen, he still had access to the list of fittings. He could recreate the Vindicator and use it to destroy Arden at a decisive moment. 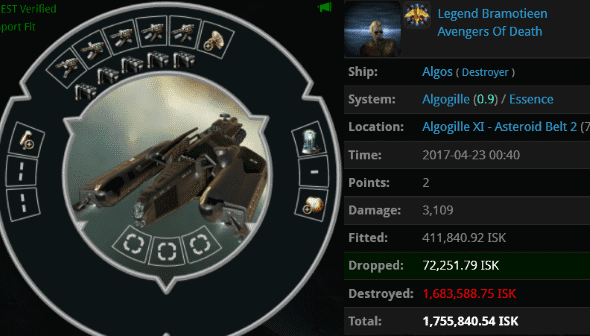 In the meantime, the Avengers of Death had their normal operations severely disrupted. Arden killed Legend's Algos while it was... ratting? 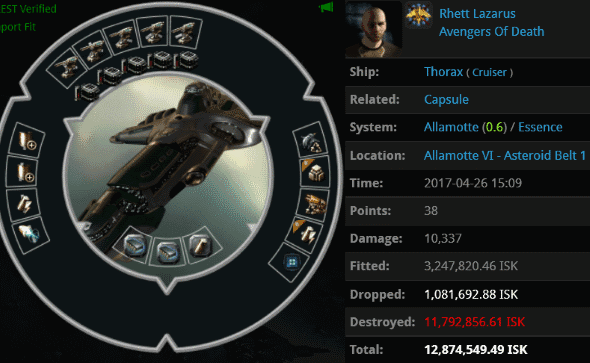 Arden wasn't the Avengers' only problem. Other wardeccers smelled isk in the water. On top of that, Legend was having trouble training his newbie pilots. For instance, this Thorax was killed by NPCs. Arden saw all of this, and he took pity on the Avengers.

Our Agent knew that the only thing left to do was to attack the Avengers' pride and joy: their Raitaru-class engineering complex. If he succeeded, it would devastate the Avengers' morale and their faith in Legend. Arden was still willing to spare them that heartache, if only Legend would pay the surrender fee--which was less than the value of the Raitaru.

Legend refused to secure safety for his corp, claiming he didn't have 500 million isk to spend. Arden steeled himself for the final battle ahead. Legend, too, knew what was coming. And he would put everything he had into the defense of the Raitaru.

To be continued...
Posted by MinerBumping at 16:04