Hmmm. Could be a good time for another edition of the Highsec Miner Grab Bag? Maybe. We'll see. 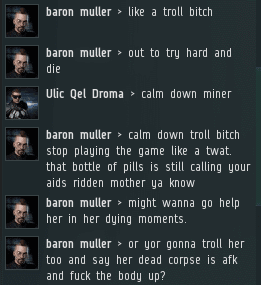 Yes, it's definitely time. Welcome to yet another edition of the Highsec Miner Grab Bag! 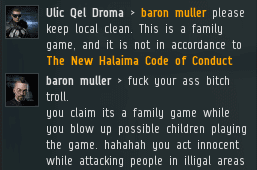 According to the latest Anti-Ganking propaganda, it's bad to gank mining ships because they could be piloted by children. And do you know how you can tell when a miner you've ganked is a young child?

They cry less in local. 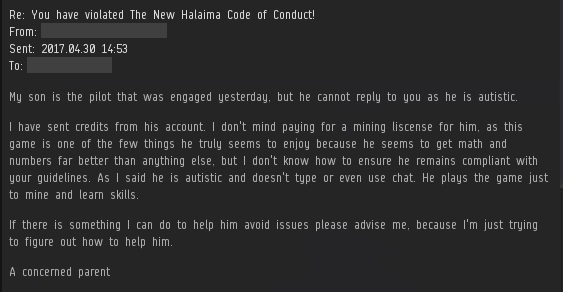 Most of the time, our Agents see miners exploiting their children to deflect blame for Code violations, as in, "I was only AFK because I was feeding my baby." On this occasion, however, we find a parent whose heart is in the right place--she bought her child a mining permit.

When the previous message was forwarded to me, I gave the parent some important information about the Code, along with some words of caution about the potential dangers of highsec mining. Parent and child were both willing to accept the risks. It's always nice to see good family values still being practiced out there. 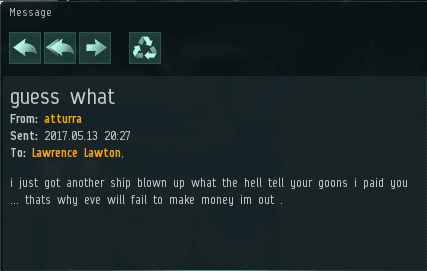 ...On the other hand, not everyone had the advantage of being raised by loving, Code-compliant parents.

As was reported on Lawrence Lawton's blog, a miner named Quizblap accused our Agents of ruining the game.

Does the name Quizblap sound familiar? Well, I'll give you a hint. He's not exactly a "new player".

You can tell how much this guy didn't care about losing his mining barge. 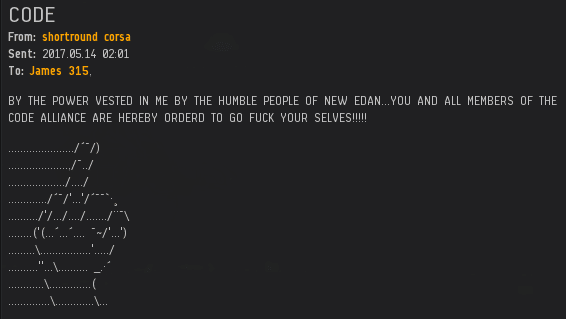 In a place like EVE--and especially in highsec--there are a lot of conflicting claims of authority. Profane gestures in ASCII generally aren't a hallmark of legitimacy. 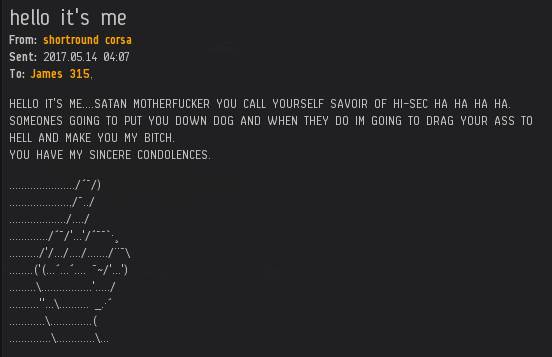 I'm not sure who shortround corsa is, but I'm guessing that somewhere down the line, somebody lost a Retriever. 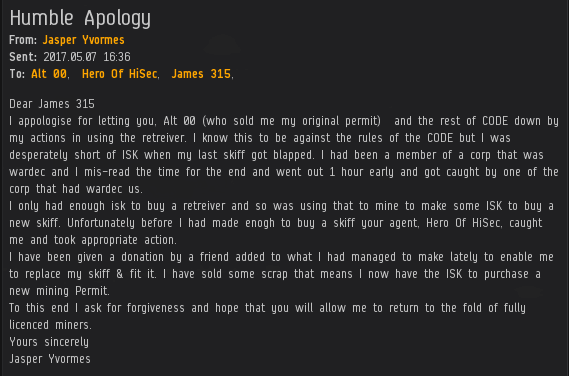 It's refreshing to see a sincere apology from time to time. Yes, there's some excuse-making in there, and a few plays for sympathy. Still, you can tell that this miner is genuinely humbled and embarrassed. We need a lot more of that attitude in highsec.
Posted by MinerBumping at 17:55