Previously, on MinerBumping... Agent Luna Nightblood stood up for the integrity of the Poinen system--and the Code--when she stopped Seth Anzomi's hauler dead in its tracks. As a self-proclaimed wormhole dweller, Seth declared himself immune from highsec laws. When he couldn't persuade our Agent, Seth threatened to hire mercenaries. 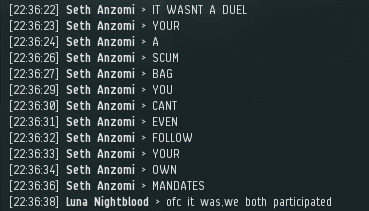 After one brief mention of the dreaded mercenaries, Seth went back to complaining that Agent Luna hadn't followed her own Code.

The Iteron wreck had gone cold, but Seth's anger was still piping hot. The longer his ranting and raving in Poinen local went on, though, the more enemies he made.

What a difference a few years of the Code can make. In the old days, at least somebody would've taken Seth's side. The Code's been around for so long now that it's accepted as an integral part of the game.

Seth insisted that the mighty CODE. alliance was dying--a claim almost as cliché as "EVE is dying". Strangely, Seth asserted that CODE. was being undermined by Agents who perform too many ganks.

More Poinen residents were losing their patience with the salty carebear. Why didn't Seth stop? Was it possible that he was stalling for time until his mercenaries arrived?

The bot-aspirant hauler lectured our Agents about the Code. Agent Luna was intrigued.

Though unintentional, Seth's actions promoted the New Order and its Code. Seth even began linking the Code in local, just like an Agent would.

Luna played the Saviour card, linking my name in local. Would this pacify the miner at last?

The mention of my name led to Seth taking a very temporary break from using all caps. But then he returned to capital letters and fake news.

Luna had tried everything she could think of to help the miner calm down. Now the only option was to wait for Seth's anger to burn out on its own.

Agent Dom Arkaral heard there was trouble brewing in Poinen. Indeed, the system was attracting a growing number of EVE players, both affiliated and unaffiliated with the Code.

Seth was fully committed to the space lawyer approach. Our Agents were confident that this strategy wouldn't defeat them.

After a certain period of time, an Agent must consider whether a miner's rage will ever subside. Usually it does. Patience is a powerful tool in an Agent's toolkit.

The Poinen community has witnessed carebear tears many times. But even they were impressed by the severity of Seth's downpour.

The other shoe dropped: Seth claimed to be deliberately wasting our Agents' time. Was there a mercenary fleet incoming, after all?