Tushino77's EVEmail can only mean one thing...

I'm not sure what, though. Anyway, welcome to yet another edition of the Highsec Miner Grab Bag! 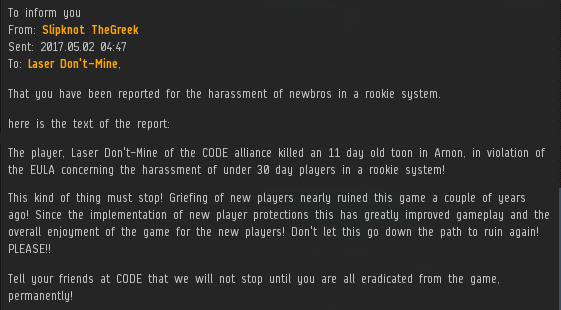 Over the years, CCP has received literally thousands of petitions about the New Order's activities. We rarely get to read the text of these petitions, but when we do, we can see why they're never answered. 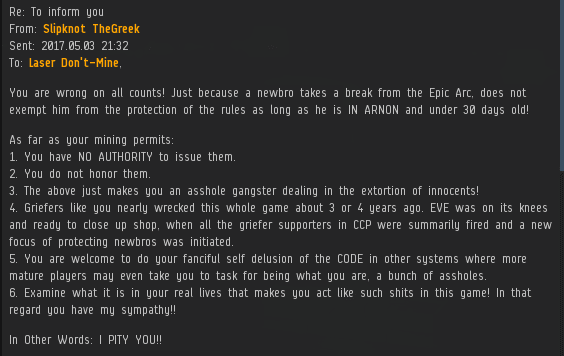 EVE almost died 3 or 4 years ago, but then CCP made some big changes and the number of players started going up again. At least, that's the history according to Slipknot TheGreek. The stats at Eve-Offline.net tell the same story, but in reverse.

Sk0oRb had nothing but pity for Agent Mildron Klinker, who was such a loser for killing Sk0oRb.

Sk0oRb couldn't get over how pathetic Mildron was. Winning PvP battles must be so depressing--unlike mining in highsec all day and being ganked, which brings such joy into one's life.

Scandal! Lord Jajda was ganked despite claiming to own a mining permit. He demanded the immediate reimbursement of his ship.

Lord Jajda's bio didn't actually contain a permit, but there was no time to answer questions about that. Money, now--no time to waste!

Liz Cadelanne refused to be swept up into Lord Jajda's urgency. Our Agents are professionals.

Victor Instagaar invited his ganker into a private convo and immediately subjected him to a barrage of questions. If only Victor had displayed such alertness and energy when the Catalysts were inbound.

The "new player" card has been abused with increasing frequency over the last few years. Agent Revis Owen expertly dismissed it, which left Victor dumbstruck.

Victor was shocked to discover that CCP was allowing PvP to go on in this spaceship combat game.

After experiencing the hardships of war, David Yate declared himself totally defeated. He contacted diplomat Dom Arkaral to tender his complete, unconditional surrender. Dom offered to drop the war if paid 5 billion isk.

"I'll do anything. Give up some of my isk? Ha! Not for the wide world."

When carebears get caught AFK, they're quick to blame their spouse, pets, or children--even children as young as two years old.

Just when it appeared Zara Crimson was going to lower the bar further, she chose to accept responsibility and thanked our Agent for ganking her. Saving a one-year-old's life and praising the Code: Two good deeds.
Posted by MinerBumping at 18:19