Help is on the way--thanks to the New Order. Welcome to yet another edition of the Highsec Miner Grab Bag!

Miners say it's wrong to shoot miners. This "rule" has no basis in anything other than the self-serving desires of the miners. Unlike the Code, which is principled. 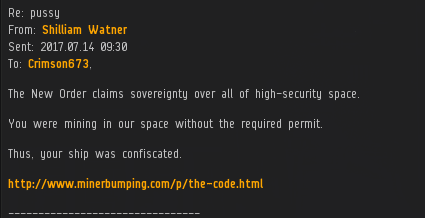 The miners who complain about not being warned have it all wrong. When miners lose a ship, that is a warning--about the loss of their future ships. We can take an infinite number of ships away from the carebears.

Van Diethelm was just a disposable PvE alt, but he thought very highly of his main character...

In fact, our Agents and their Code are the only reason highsec doesn't spiral completely out of control. Can you imagine a highsec run by miners?

Luckily, highsec will never be ruled by miners. The Code is forever. 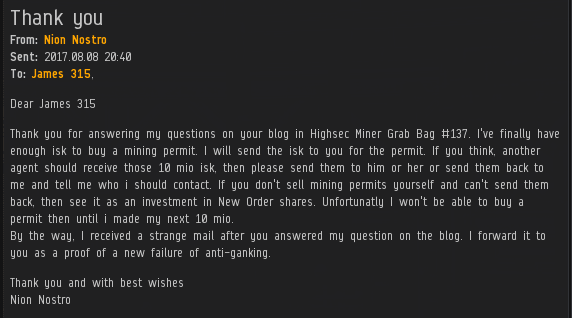 In the previous edition of the Highsec Miner Grab Bag, I answered Nion Nostro's questions about the Code. After the post went live on MinerBumping, Nion received a strange EVEmail:

It would seem there are some rebels who troll this blog for potential recruits. Seriously, have they even read the stuff that some of these miners write? No wonder the resistance is so toxic. 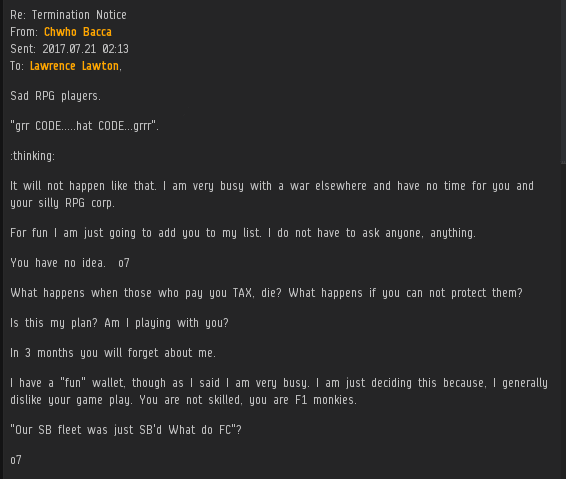 Chwho Bacca couldn't care less about the mighty CODE. alliance or the Agent who'd ganked him. I mean, he really didn't care. So much so that he gave quite a bit of thought to how little he cared. 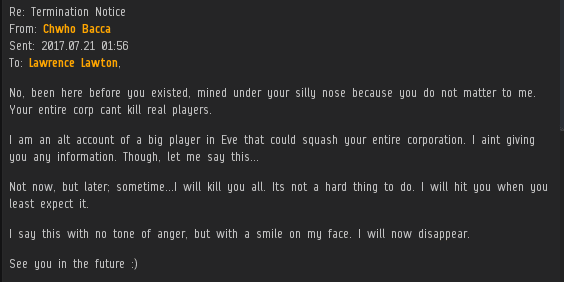 No wonder Chwho Bacca looked down on our Agent. Chwho was the alt of an extraordinarily powerful EVE player. Cool! 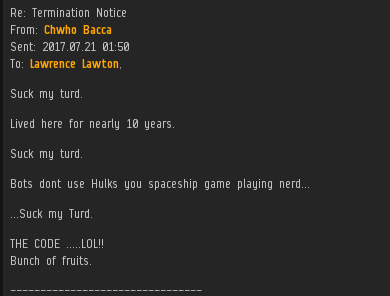 The Code is great because the Code is good. It's the most powerful piece of literature ever produced by EVE Online. Why do we send miners a link to the Code after we shoot them? Because the miners need it, and because we care. No wonder EVE's smartest players recognize that we're the good guys.
Posted by MinerBumping at 17:58