Why Are Carebears Required to Say GF?

Let's talk about the Code today.


Upon being suicide ganked, a miner should congratulate the ganker on his success. A "good fight" or "gf" in local is customary.

Ah, the Good Fight Clause. Of all the provisions in the Code, this is one of the most frequently violated--and complained about. Highsec miners (and all other players against whom the Code is enforced, as the provision applies to them, too) have always had difficulty understanding why they owe their attackers a "gf". 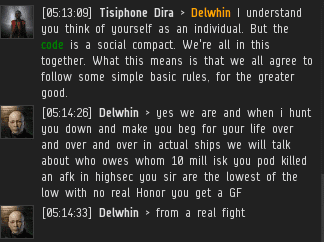 In reality, it's not the particular conditions or circumstances of the fight that cause the Code violator to disobey the Code. He refuses to offer a "gf" regardless, for the simple reason that he is a bot-aspirant. 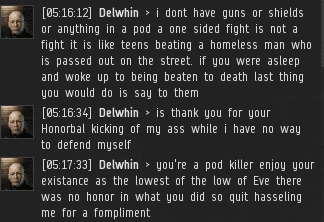 That's why the Good Fight Clause is in the Code: It's a bot-aspirancy test. Not unlike the permit requirement, actually. The bot-aspirant carebear believes and hopes and behaves as if highsec is 100% safe. He doesn't need to worry about PvP; he's in a PvE-only zone. Then an Agent of the New Order comes along and engages in PvP with him, which results in the bot-aspirant's death. How does he resolve this conundrum? Does he admit that he was wrong? Heck no!

The bot-aspirant decides that the PvP he just experienced wasn't PvP at all. He denies the legitimacy of the combat, whether it involved suicide ganking, wardecs, aggression games, kill rights, awoxing, or any other mechanism by which fun can be had.

In this state of denial, a carebear may accuse the Agent of griefing, harassment, bullying, exploiting, etc. He may petition his loss. Usually, though, he simply refuses to accept that he was engaged in PvP. Often, the carebear will instruct our Agent that if he wants PvP, he should go to lowsec. Even though our Agent just found success while looking for PvP in highsec!

Now consider the alternative. If a carebear responds to a gank with a "gf" and means it, he has acknowledged the legitimacy of highsec PvP. He isn't wasting a GM's time with a frivolous petition. He isn't begging CCP for absolute safety in highsec. He isn't insisting that he be allowed to engage in risk-free PvE and break the risk/reward dynamics of the EVE universe.

That, my friends, is a good start.

I'd like to conclude today's post by addressing a common question we get from scummy rebels: Are Agents of the New Order also required to offer a "gf"? Even if the PvP involves an Anti-Ganker attempting to interfere with an Agent's gank?

The Code provision in question refers to a responsibility that carebears have, not Agents. An Agent may, in his discretion, choose to honour another player with a "gf", if he feels moved to do so. He is not required to, of course, for the same reason that an Agent is not required to carry a mining permit. There's no need to test an Agent for bot-aspirancy, no need to question his belief in the legitimacy of highsec PvP.

The Agent is PvP incarnate; he is EVE, the best of EVE. He is the living embodiment of EVE's purpose and its content. The Agents of the New Order carry the torch of EVE for as long as the game still exists. We are its fire and light.

And that, really, is honour enough. Carebears, when you see an Agent of the New Order in local, you should feel immensely grateful--even before he starts shooting you.
Posted by MinerBumping at 17:35