Previously, on MinerBumping... Agent Lewak encountered the truth of the age-old saying that "no good deed goes unpunished" when he popped Erikoff Beldrulf's unlicensed Venture and was treated to a torrent of abuse in local chat. Agent Alt 00 stopped by the Hek system and was appalled by Erikoff's real-life threats and racist language.

Though Alt 00 wasn't the one who ganked Erikoff's Venture, her membership in the mighty CODE. alliance made her guilty by association--despite Lewak not being in CODE. himself.

Erikoff needed a permit pretty badly. It was obvious that whatever his plan for EVE was, it wasn't working.

Our Agents offered to help the miner join the New Order family. He chose to pledge allegiance to a different organization instead.

Though miners often accuse our Agents of being like Hitler, the reality is that the New Order is the greatest opponent of Nazism in EVE. By contrast, the Anti-Gankers would embrace the Devil himself if he lost a mining barge.

The carebears' sympathy for Nazism and other forms of extremism makes sense: Their view of the world is upside down.

Erikoff blocked our Agents, made a few new enemies, and blocked some more people. The poor fellow was descending a downward spiral. Luckily, Agent Alt 00 had an alt who wasn't yet blocked. She quickly penned an EVEmail to the miner. 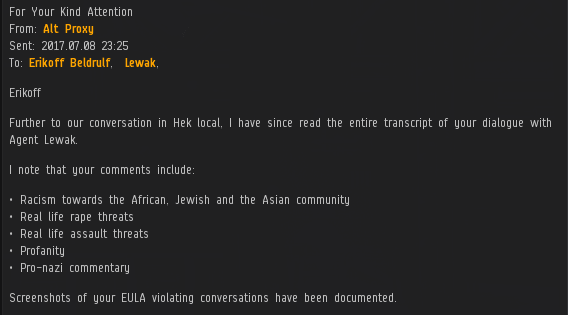 Our Agent made no secret of her disapproval of Erikoff's conduct. But there was a way out:

Having witnessed everything that Erikoff had said and done--starting with his unlicensed mining and ending with his impromptu one-man Nazi rally in Hek--one could be forgiven for thinking Erikoff was a hopeless case. But that's not the way our Agents operate. The New Order is absolutely committed to 100% Code-compliance in highsec. No miner left behind. 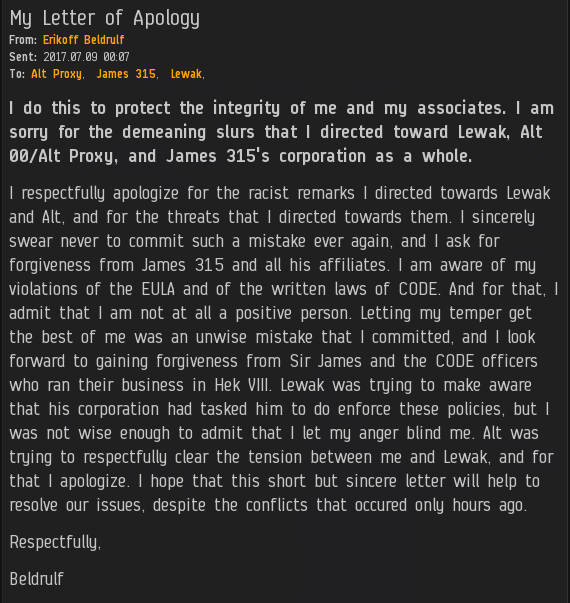 Erikoff took Alt 00's advice about writing an apology EVEmail to everyone. The miner no longer displayed any desire to rape or murder his fellow EVE players. Erikoff's opinions on the Code were also much improved. What a victory for the New Order and its Code! 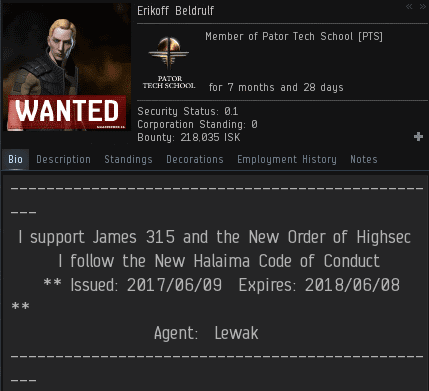 Down with the Swastika, up with the mining permit. As always, the Code made highsec--and the world--a better place.
Posted by MinerBumping at 17:01