Over One Trillion Two Hundred Eighteen Billion in Shares Sold

The only thing more generous than buying a bunch of New Order shares...

Buying a bunch of New Order shares for a friend. Buying shares will help you in life, trust me. But if you refuse to take my word for it, read on: 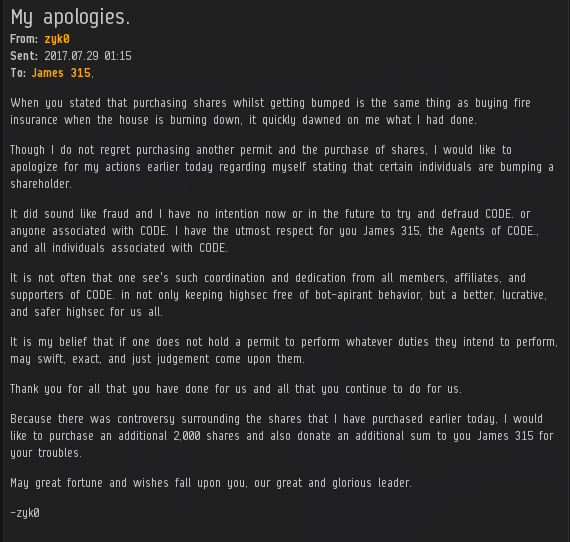 Last week, there was indeed quite a controversy surrounding a freighter pilot who tried to use a last-minute share purchase to escape punishment. Having reconsidered his actions, zyk0 purchased 2,000 additional shares. This time he did it right. Having purchased shares for the right reasons, zyk0 receives a Double Supreme Protector's Tip of the Hat™ for sending us past the 1,207 and 1,208 billion isk marks. 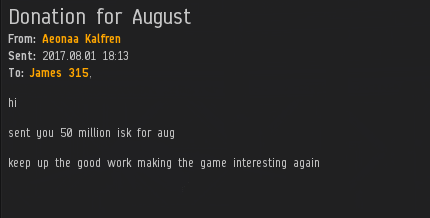 Where CCP fails, the New Order succeeds. We keep EVE worth playing. Someone's gotta carry that torch--even if its flame is kept lit with the burning hulks of non-compliant Hulks. 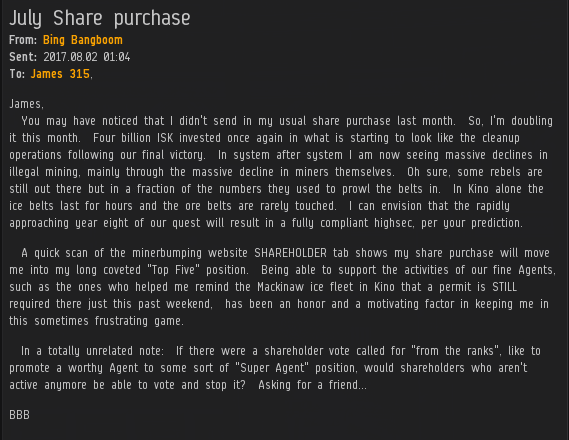 It has been quite some time since the last shareholder vote. When will the next one take place, and will former EVE players come out of the darkness to cast their votes? Stay tuned. 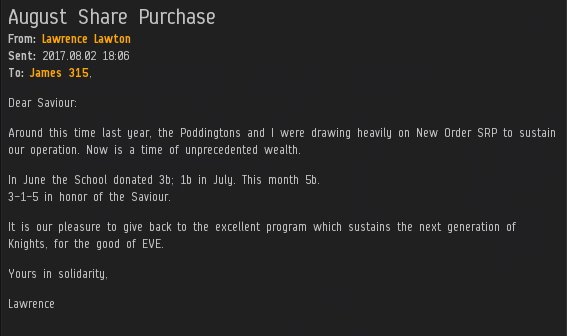 The Lawton School for Pubbies Who Can't Mine Good is on the rise. A classic sign of a rising power: One-upping more established powers. The School purchased 5,000 additional shares, earning the top spot for the month (so far) and taking us beyond the 1,213, 1,214, 1,215, 1,216, and 1,217 billion isk marks. Another accolade for this fine educational establishment: A Quintuple Supreme Protector's Tip of the Hat™. 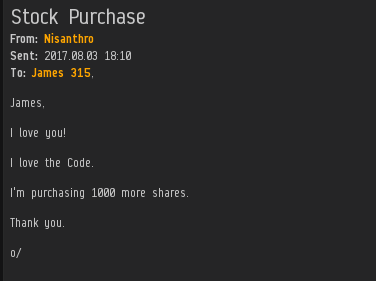 Unlike the rebellious Anti-Gankers, who are motivated by hate, greed, envy, and a number of other nasty little emotions, the New Order is fueled by love. Nisanthro said so himself. He purchased 1,000 additional shares and sent us past the 1,218 billion isk mark, earning a Supreme Protector's Tip of the Hat™ in the process. Solid work.

I'm always telling people about the benefits of New Order shares. "What are the expected returns, how often are dividends paid?" people ask. Friend, your entire EVE account could depend on whether you've purchased New Order shares. How's that for dividends?
Posted by MinerBumping at 16:10