Everyone knows that the EVE "new player experience" (NPE) is a joke, and that the tutorial is a mess. Smart people have encouraged CCP to direct new players into the welcoming embrace of the New Order, where they can learn what EVE is really about.

Too often, new players end up in channels like Anti-Ganking. They become at-risk youths.

Lewak was fascinated by the mighty CODE. alliance and its army of gankers. Unlike carebears, they seemed to be enjoying themselves. And they were far more exciting than a bunch of grumpy miners.

In fact, the New Order is the best place for a new player to learn EVE. Carebearing is far easier--nobody ever said elite PvP is easy--but at least the newbies don't learn bad habits from us that they'd need to unlearn later.

Though Anti-Gankers generally argue with each other about everything, there are a few things they can all agree on: For starters, Goons are bad.

Carebears all across highsec despise Goons, even if they've never encountered one. That's because from the earliest days of the Code, conspiracy theorists spread the rumor that Goons were funding the New Order.

Though imaginary, the Goons' financial ties to CODE. earned them the hatred of new generations of carebears who'd never witnessed Burn Jita or the Gallente Ice Interdiction. No matter how new or old a highsec miner is, they've all seen CODE.'s ganks.

The Anti-Gankers injected Lewak with their poison as best they could, but the newbie couldn't shake off his interest in the Code. Something about it captured his imagination in a way that AFK mining couldn't.

We all know that Anti-Gankers have difficulty keeping up with current events; their knowledge of EVE's past is similarly sketchy.

Luckily, the past matters little. EVE players today don't really need to know about anything that occurred before the Code came to highsec. (Accurate information about EVE's history may still be illuminating to the curious.)

From time to time, even an Anti-Ganker will succumb to the temptations of the forbidden art of suicide ganking. They're quick to say they didn't enjoy it, though.

Lewak sensed that he wouldn't be able to get the full story on CODE. from the Anti-Gankers. His instincts told him to look elsewhere. 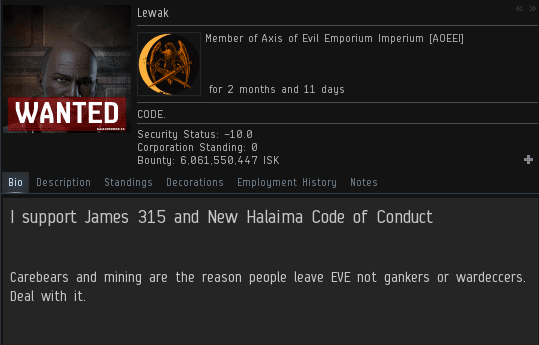 In time, Lewak found his way into the ranks of CODE. itself. There's an important lesson to be learned here: Ultimately, the lies of the carebear will always be conquered by the truths of the Code.
Posted by MinerBumping at 17:41