Previously, on MinerBumping... Agent Bob the Fourth marched into the Solitude region, handing out the blessings of the Code like they were going out of style. Actually, the Code's never been more in style, but Ganebass Orlenard kept littering highsec with Mobile Tractor Units. Bob was happy to clean up the mess.

I guess you can only destroy so much of a man's property before he sets you red.

Agent Bob's bumper alt might have played a role, too. Ganebass didn't like having his mining ship get kicked around the belt. 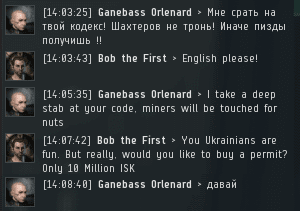 Ganebass made some ominous threats, but Bob didn't put too much stock in them. What were the odds that this miner would take action? 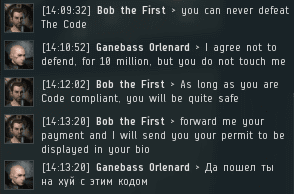 As expected, the miner was quicker to reach for his wallet than reach for a gun. However, Bob noted with some concern that the miner kept slipping back into his native language.

Ganebass let his temper get the better of him. He switched into a Gnosis-class battlecruiser and began yellowboxing our hero. Clearly this miner was angry, but was he angry enough to do something truly desperate? 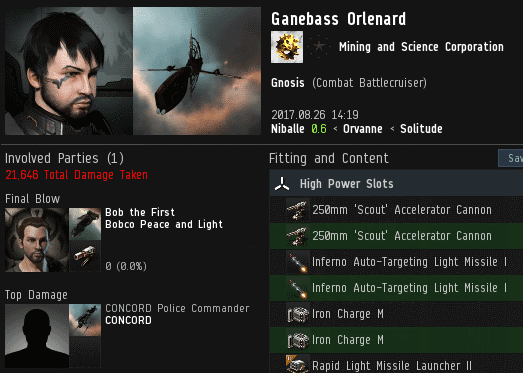 He was. In the heat of passion, Ganebass opened fire on a duly licensed Agent of the New Order of Highsec. Bob retaliated with a brilliant show of force. CONCORD was also present during the battle. 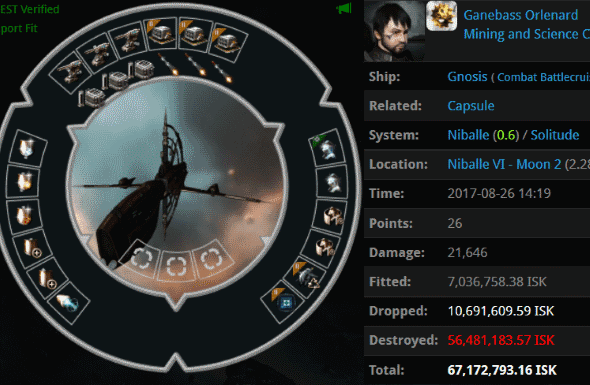 Ganebass' Gnosis was a sorry excuse for a ganking vessel. Apparently the miner thought he could tank CONCORD. When he died, he was so stunned that Bob was able to catch his pod, too. 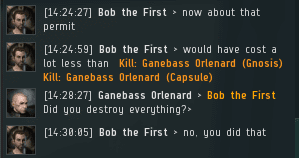 Ganebass tried to put the blame on Bob, but he was the architect of his own destruction.

It should've been obvious by now that the New Order cannot be stopped. Ganebass should've known that his old way of life was unsuited to the new, Code-compliant Solitude region. Even so, Ganebass bitterly clung to his traditions. 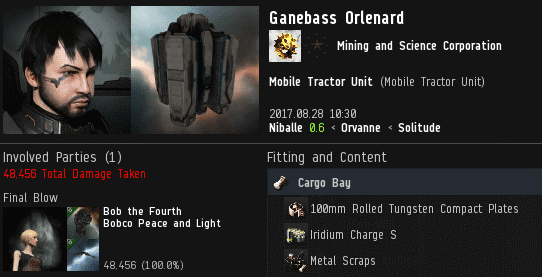 ...Which included the ritual use of MTUs. 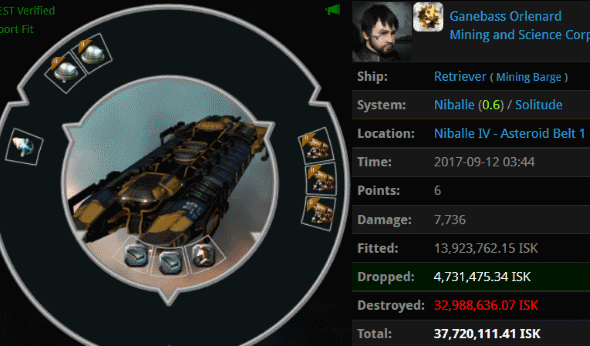 A few weeks later, Bob tried to get in some good ice mining, only to have his Retriever terminated during one of Bob's patrols.

This time, Bob didn't even need to employ suicide ganking; he simply used his kill right while Ganebass was AFK. The miner was utterly discredited.

In spite of his glorious victories and rapidly growing fame, Bob remained levelheaded. He kept his focus. There were plenty of miners who still needed his help.