What do people really think about the Code? We know what the rebels think, but they're Goofuses. What about people in nullsec, for instance? Today, we'll take a peek inside the KarmaFleet public recruitment channel to find out.


Vegan Spyder > After I've submitted the application via website do I just wait for a recruiter?
Hydrium Eternite > Vegan Spyder Yes, the recruitment process usually takes up to 72 hours but can be longer depending on the queue.
Beef Punchmeat > Im on day 5 right now, but they have been in contact with me
Hydrium Eternite > No worries, we're working hard to clear out the queue. Recent events have brought out all the people wanting to join so we've been slammed more than usual lately.
Beef Punchmeat > I'll bet
Beef Punchmeat > It brought my ass back after being off for 4 years

KarmaFleet is one of the most popular destinations for players seeking to find a home in nullsec. Among them: Beef Punchmeat, a highsec miner with dreams of making it big.

The very first thing potential KarmaFleet recruit Beef was asked about was his lack of a New Order mining permit. 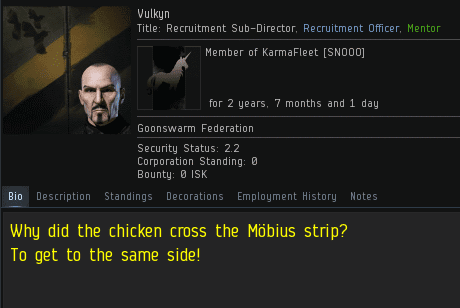 The man doing the asking was Vulkyn, an official KarmaFleet recruitment officer. If you apply to join KarmaFleet, Vulkyn is one of the people who decides whether you get in or not. And he does his job very well.

Like a lot of important people in nullsec, Vulkyn is well versed in the Code. Beef soon found himself in a job interview where he was asked about his own opinions of the Code. So far, it wasn't looking good for the job applicant.


Phoenix Flames > I'm going to assume since you're in this channel that you want to join KF, which would mean highsec would cease to be relevant
Beef Punchmeat > How the hell does that work, and Yes, I assume that I would be moving out to the Imperium
Vulkyn > CODE does a great job of getting people to leave their solo highsec mining life, and join a community of layers somewhere else.

Some people will tell you that the great powers of nullsec either ignore or look down upon the mighty CODE. alliance. Although that's true of the poseurs classified as "Nouveau Null", most significant people in nullsec recognize the importance of what we bring to the game as a whole.


Beef Punchmeat > Right, and I disagree with the notion that someone in a game, that I pay an actual company for the pleasure of playing, would seek to dictate to me how I should and should not play
Tami Okanata > Beef Punchmeat are you objecting to people shooting spaceships in a game about shooting spaceships?
Beef Punchmeat > Not at all, I am objecting to being asked to contribute to a group of people seeking to extablish arbatray rules. Go after bots for all I care, I dont use them. But CODE does not seem to have total control over thier agents, nor do they accept that I
Beef Punchmeat > Need to be able to walk away from my keyboard on ocasion

Once someone makes the move out to nullsec, one of the first things he might notice is how many of his fellow players regularly read MinerBumping. The terminology they use is instantly familiar. Beef, too, spoke in terms familiar to our readers. Not because Beef reads MinerBumping, but because he was a typical highsec miner.


Tami Okanata > If you need to go to the bathroom, just dockup. The CODE has a whole section on this.
Hydria Eternite > If you have the force projection needed to enforece your rules, your rules are the law.
Tami Okanata > And as the CODE always wins, it's the law. Always.
Beef Punchmeat > That is despotism, which I do not support. And why should I dock up? I am willing to take the risk of being ganked
Tami Okanata > But if you do that... you might look like a bot. And... well see today's MinerBumping.com post about that....

The MinerBumping article referenced on this day was the Avoid Even the Appearance of Botting post. Here's a protip for anyone planning to interview with a nullsec corp: Make sure to read the day's MinerBumping post before you go to your interview. There's a good chance you'll be asked about it, so make sure you're prepared to discuss it intelligently.

Some of Beef's peers were also waiting their turn in the recruitment channel. They made comments about their own view of the Code. Their views were better than Beef's.


Beef Punchmeat > I havent been ganked by them, I dont think I will because I tend to follow the code anyway, but I wont pay anyone a penny for nothing
TestMonkeY > hey guys, put my application in yesterday, not heard anything :D whats the usual time for getting reviewed?
Aram Viscart > Be patient
Aram Viscart > Go gank some miners

Beef began to sway with the breeze. He noticed that the sentiment of the channel was pro-Code, so he claimed that he mostly obeyed the Code--with a 10 million isk exception.


Hydria Eternite > Basically what the Code is doing is teaching you how to not lose your ships. Neut in system? Neut landing on grid? Be aligned already and warp out when they land.
Beef Punchmeat > Ya, well I disagree with them. They are playing a game, and thats fine, but I dont have to support them. At the same time I havent donated to the aint CODE groups. I just dont belive in giving my isk away for nothing. They should be more than able to
Beef Punchmeat > fund themselves if that is the path they want to take
k0p3 > well code dosent need youre money

The simple fact was, Beef showed all the signs of being a bot-aspirant. He probably assumed that he'd be able to make a fresh start when he finally cut ties with highsec and tried to head out to nullsec. He was wrong.


Tami Okanata > You might not donate, but lots of other people do: http://www.minerbumping.com/p/shareholders.html
k0p3 > i think its just to show them that you are someone that has learned the leason
Beef Punchmeat > Great, so whats the problem then? I wont donate, and the game wil go on.
Beef Punchmeat > They havent taught me shit

Beef dug in his heels. It was too late to pretend to be a Code-compliant miner, and he knew it.


Cyrina FaithWeaver > code has an excellent reimbursement plan for suicide ganks
Aram Viscart > They don't need your support or mine. I donated because they provide me with countless hours of entertainment through their website
Hydria Eternite > The code teaches all.
Hydria Eternite > Even if that lesson is join a corporation and get the hell out of highsec.
Beef Punchmeat > I am happy to pay the people who made the game. I will not pay other players for nothing

The miner was stubborn and greedy. He wouldn't part with even a nominal amount of isk--not even to save highsec. Needless to say, Beef didn't come across as a team player.


Beef Punchmeat > brb going to smoke
Hydria Eternite > I read it when I'm at work, I love the kills of the week.
Aram Viscart > I originally disagreed, too, but seeing the kind of people who live in hisec through that site and what they do to add content to the game, I changed my mind
Tami Okanata > Also: stop mining alone, join a group and have fun. At least play Cards Against Humanity with other people while you mine.

Beef took a quick smoke break. It's not hard to imagine why he was feeling a bit stressed. And when he returned...