Previously, on MinerBumping... Agent Bob the Fourth made it his mission to bring light to the Solitude region. But the miners he found were filled with darkness. 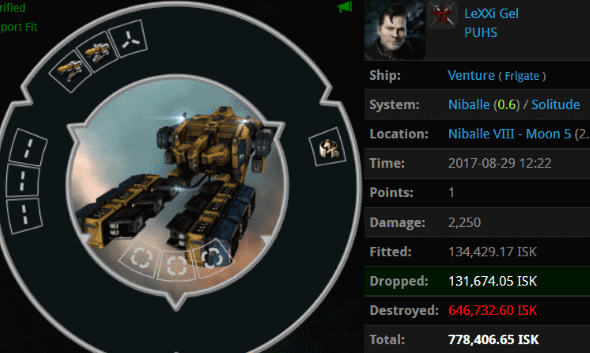 Bob winced when he saw LeXXi Gel's Venture fit. If you've never seen a miner who uses 400mm Crystalline Carbonide Restrained Plates, you can feel free to check that item off your bucket list. Even dumber: LeXXi didn't have a New Order mining permit. 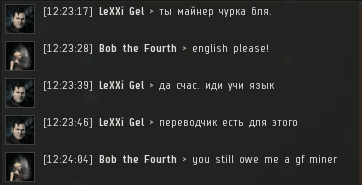 Some miners try to hide behind the language barrier. It never works. CCP may drop foreign language support, but our Agents do not.

LeXXi fired up a translator and tried to explain why he didn't own a permit. For future reference, mining permits are required for all PvE activities in highsec. And yes, you need a permit even if you're doing a scarecrow.

You gotta hand it to whatever program LeXXi was using. Even with the limitations of the Russian translator, the miner was able to fully convey his sense of nihilism and class struggle.

Our Agents do their best to communicate with highsec miners, regardless of the language they speak. Fortunately, EVE has some methods for sending messages that everyone understands:

LeXXi threatened our Agent by making his kill right available. In this way, the miner signaled that he was only becoming more hostile. 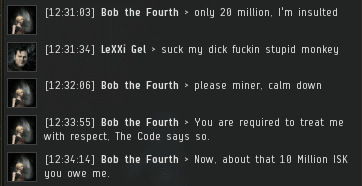 Though the miner had struggled to express himself before, he was suspiciously fluent in English profanity.

As LeXXi sent another insult to our Agent, Bob noticed a familiar face in local: 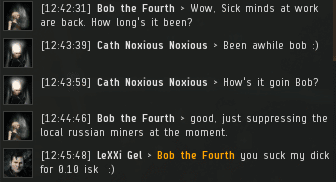 Cath Noxious Noxious belonged to the corporation defeated by Bob in Part 1 of this series. As you'll recall, Cath's corp tried wardeccing Bob, only to have Bob set the war mutual. Cath and all his friends disappeared for a month. 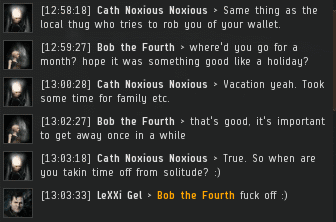 By coincidence, Cath went on a family vacation that lasted until he figured out how to retract the mutual wardec.

Bob was filled with compassion as he watched LeXXi's ore-addled brain disintegrate right in front of him. Was there anything our Agent could do to help him now?