Previously, on MinerBumping... They said the siege had to end soon. It couldn't last forever, could it? But Mission Ready Mining corporation found itself locked in a seemingly interminable battle with the Agents of the New Order. The Gelhan system, once home to a frenzy of mining activity, was shut down by Agents like expert bumper Georgia B Dixie. But MRM had over 2,400 members at its command, and eventually, they had to do something. 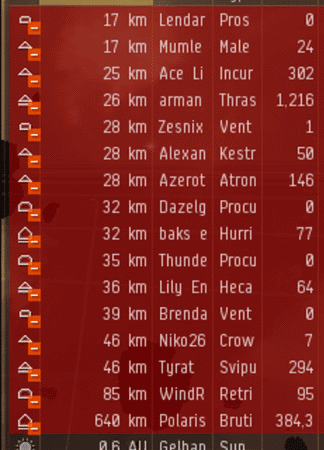 The giant corporation began sending fleets to Gelhan. Numerous pilots swarmed the asteroid belts. They were assigned the task of protecting a handful of miners who were still willing to risk destruction. 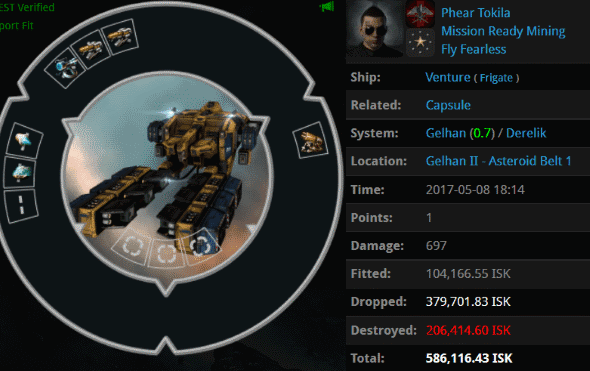 It was not enough. Our heroes were still able to slip into the belts and gank their targets, right before the watchful eyes of the miners' would-be defenders.

MRM remained defiant in local. However, their morale was severely undermined by the ganks. They'd been assured that with enough defense ships, they'd be untouchable. Now they knew it wasn't true.

The defenders, too, lost confidence in themselves. They were putting in a lot of time--time that could be used for grinding isk--and it wasn't paying off. The miners they were "protecting" still got ganked. What was the point?

Finally, the MRM defense fleet had no choice but to advise the miners not to mine while Agents were in the system. They couldn't guarantee their safety. 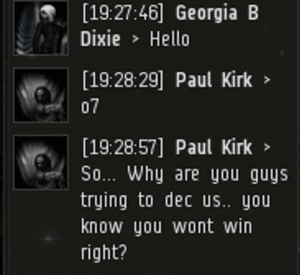 Unfortunately, our Agents had a habit of idling in the system, making it difficult to know when it was safe to undock. But surely--surely!--the siege of Gelhan would end eventually.

The next day, Orca pilot Le Anne tried to return to mining, only to be bumped away by Agent Georgia. The MRM defense fleet, whose ranks had been noticeably thinned due to the previous day's failures, was useless. Le Anne would need to take matters into her own hands. 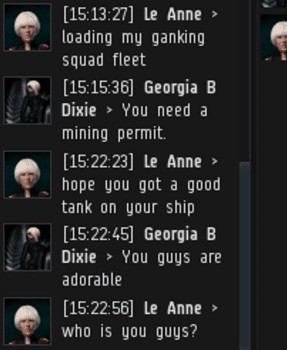 Le Anne had a nasty surprise in store for Georgia. Le Anne wasn't just another carebear-staring yellowboxer. No, she had a gank fleet ready to pounce on Georgia's bumping Machariel. 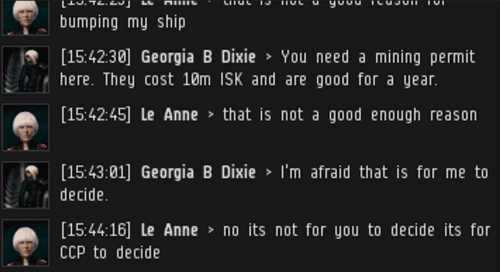 Eventually, Le Anne revealed that she didn't have any gankers at her disposal. Unable to escape the bumps, she decided her only option was to file a petition and hope that CCP would ban Georgia.

Despite the petition threat, Georgia wouldn't stop bumping Le Anne. Not until she complied with the Code. The MRM defense fleet looked on, helpless. 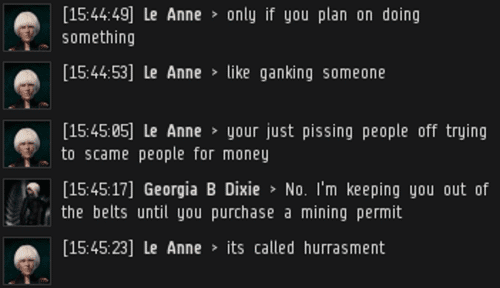 Even if CCP wouldn't ban Georgia, maybe Le Anne could persuade Georgia that she was breaking the terms of the EULA? 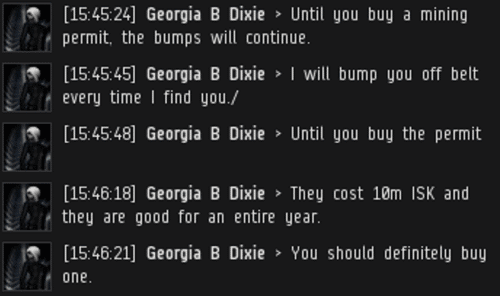 Alas, the strategy failed. Georgia wouldn't stop bumping, and the New Order wouldn't lift the siege of Gelhan. The miners were aghast. This madness had already gone on for far longer than anyone could've imagined--yet it would continue still. Surely a corporation with 2,400 members could find a way to put a stop to this?