In recent years, September 10th has become known as A Day of Remembrance, A Day of Victory. For it is at this time of year when we remember all those Agents of the New Order who have been unjustly permabanned from EVE.

And boy, do we remember them. The Permabanned Heroes of the Code shareholder account, created in their honour, is credited with the purchase of 206,425 shares. That's over 200 billion isk dedicated for use in the destruction of bot-aspirants. This account was the largest New Order shareholder until the recent (and staggering) purchase of 315 billion isk worth of shares by I'm quitting Eve PV Rock I want to talk with you--itself made in part to honour the fallen. 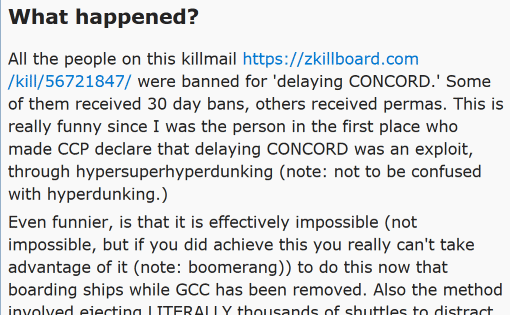 Although September 10th, 2014 is the most notorious day in the history of permabans, CCP has, on occasion, continued to err on the side of the banhammer. Last autumn, a number of Agents were given a 30-day ban which resulted in a Reddit thread by none other than Globby himself, the inventor of the hyperdunk and hypersuperhyperdunk. 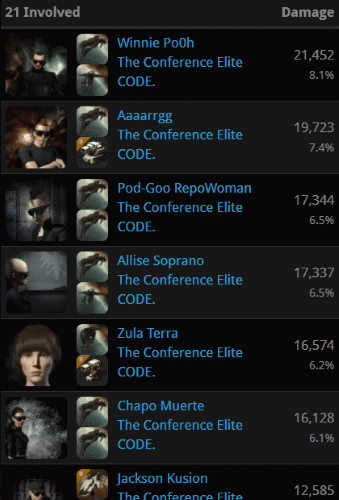 On that occasion, a standard jump freighter kill somehow led to CCP mistakenly giving a temporary ban to every ganker listed on the kill.

Despite the overwhelmingly pro-carebear, anti-Code sentiment of the EVE subreddit, Globby's thread was upvoted to the top. Since the kill obviously did not involve any kind of exploit, the community demanded an explanation. CCP Falcon was forced to make a statement. This was quite a rare event, since ordinarily no one at CCP will comment publicly on bans.

Falcon claimed that he ensured everything was on the up-and-up by personally speaking with the GMs responsible for the bans (who apparently operate out of a basement). He did not, however, see fit to explain the reason for the ban, leading intelligent observers to conclude that the bans were made in error but that CCP was too stubborn to reverse them--especially since the bans were temporary anyway.

After a month, the gankers returned.

Nevertheless, CCP's habit of accidentally permabanning people who didn't break the rules reasserted itself. This time, the target was the Kusion family, all of whom were permabanned three months ago. 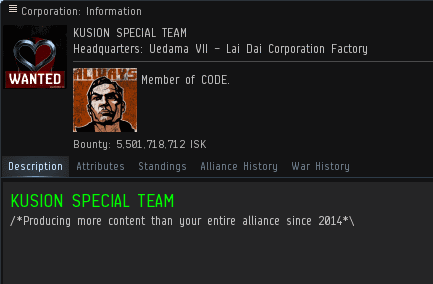 Jason Kusion and his merry band of ganker alts, who spent most of their time in The Conference Elite and ended their career in KUSION SPECIAL TEAM, are among the deadliest and most famous gankers in EVE history. Jason Kusion is credited with over 10 trillion isk in kills. This doesn't count the innumerable kills scored by other Kusions when Jason Kusion wasn't on the killmail. Impressively, a very large percentage of the 10 trillion isk consists of kills performed entirely by the Kusions. 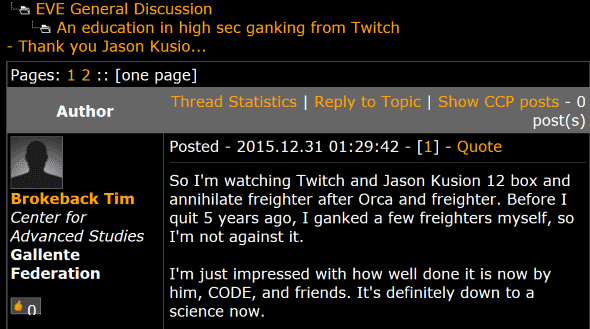 One of the reasons the Kusion clan became so widely known and respected is that Jason streamed many of his ganks on Twitch, so that everyone could see he was a master of multitasking and not controlling his alts with input broadcasting software (e.g., ISBoxer).

The Kusions are best known for the unthinkable carnage they wrought. However, Jason Kusion also had a lighter side. He enjoyed practical jokes, such as the Ruse Kruise, which swept up most of the Reddit and Anti-Ganking communities.

Nevertheless, the Kusion ganking spree could not last forever. I received the following message after the banhammer fell:

"Jason Kusion and all alts has received a permanent ban on all accounts. No email given. The reason given was 'Eula Violation.' He hasn't even played for at least a fortnight."

And a month later:

"Jason Kusion has received a permanent ban with the only reason being 'Eula Violation.' He didn't even receive an email in regards to it - and CCP is not responding to petitions."

Many have witnessed the cowardice and carelessness with which CCP sometimes bans EVE's best players. I've experienced it myself. As many of you know, a few months after I started playing EVE in 2006, I was accidentally permabanned by CCP. After I petitioned the ban, it was lifted. If CCP's customer service had been as deficient back then as it is now, the entire history of EVE would have taken a much different, much darker path.

Nevertheless, those Agents of the New Order who remain in EVE are the very people who keep the game going. And we are deeply inspired by the Martyrs of the Code. Their bravery runs through our veins. And for that reason, the bot-aspirants of highsec still tremble at the mention of their names.
Posted by MinerBumping at 18:19