In EVE, Threats Are Common but Bans Are Rare

Nullsec dwellers were amazed this week by news that one of Circle-Of-Two alliance's highest-ranking officers, The Judge, stole over a trillion isk worth of assets and handed important infrastructure to the alliance's enemies. Immediately after the betrayal was discovered, Circle-Of-Two's leader, gigX, went ballistic in alliance chat--which was actively being streamed. The result was an article on PC Gamer with a stunning headline: "EVE Online alliance leader permanently banned after threatening to cut off another player's hands."

gigX's permaban for "real-life threats" was confirmed by gigX and CCP Falcon. Since highsec carebears frequently make these kinds of threats to me and my Agents, a lot of people wanted me to weigh in on the subject. It's true that real-life threats are a common occurrence in highsec. MinerBumping readers won't be shocked by anything gigX said; it's certainly not the first time they've read something like it.

Heck, it's not even the first time we've seen real-life threats involving the mutilation of someone's hands: 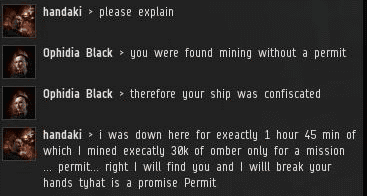 I'm referring, of course, to handaki. Or as he's affectionately known, "Handaki the Hand-Breaker". In the wake of gigX's ban, one might wonder whether all of those carebears get permabanned, too. 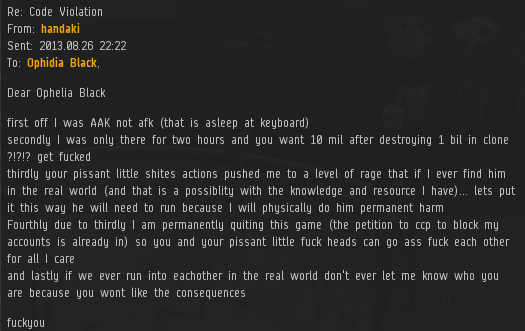 The answer is a little complicated. Take Handaki the Hand-Breaker, for instance. Was he banned? Possibly. Or maybe CCP simply granted his petition to close his account, or perhaps he simply quit the game. Since CCP normally doesn't comment on bans, the only way to know for certain that someone's been banned is for the banned player himself to confirm it through out-of-game channels.

However, if someone hasn't been banned, this can sometimes be confirmed. For example, we know Be Human wasn't banned for this threat because he recently joined a new corp. If a player appears on a killboard or changes his bio, that can also be used to confirm he's still active. 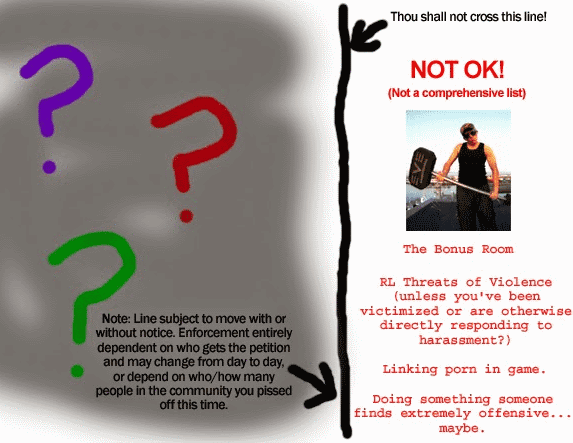 It's widely believed that highsec carebears are less likely to get punished for making real-life threats or committing other violations of the EVE ToS. Former CSM member DJ FunkyBacon demonstrated this point when he made this nifty diagram for a discussion about CCP's banning policies.

Finding examples of carebears who make real-life threats is as easy as jumping to a random post on MinerBumping. The threats sometimes contain gray areas, though. Joseph McFarlane wasn't banned for this EVEmail, perhaps because the threat was hypothetical: "If I lived on the same continent as you... But I don't."

Chupa Onil wasn't banned for threatening to cut off our Agent's ear. Maybe ears are not as valuable as hands?

And threats of cyber crimes, perhaps, are not as egregious as threats of physical violence.

GRAND INQUIZITOR, too, continues to play EVE--despite making a threat even less veiled than gigX's.

This, too, happens all the time. Highsec carebears encourage other players to commit suicide even more often than they make threats of real-life harm. And the punishment? Don't count on them getting even the 30-day ban The Mittani received for the wizard hat incident. In most cases, we can confirm that highsec carebears who encourage suicide are not punished by CCP. None of the following resulted in permabans:

This is just a tiny sample, mind you. In each instance, the player joined a new corp or logged a kill/loss on zKillboard well after the incident. (In the case of Infected Space-Monkey, he updated his bio--possibly at the urging of a friendly GM. His old bio contained additional encouragements of suicide.)

Now, I know what some of you are thinking. "But James 315," you say. "The carebears were pushed into making those statements. Of course they lost their temper after being ganked. Their ships and implants were destroyed!"

It's interesting, though, that players outside of highsec are expected to keep their cool, even when they lose assets. gigX and his alliance lost over a trillion isk, but that was no excuse. Miners lose their minds over far less. Consider this next gentleman, who may have actually managed to get banned, though we can't confirm it either way:

How much isk do you think he lost? What kind of blingy ship could've inspired such an EVEmail? 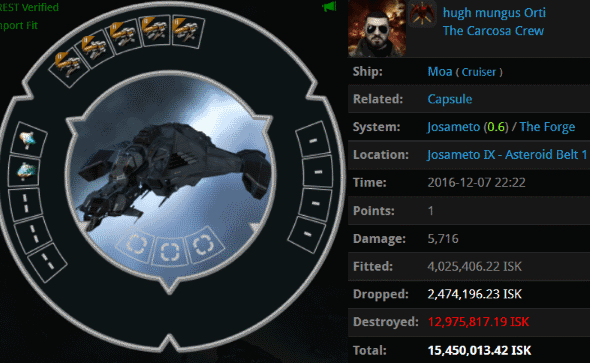 It was a mining Moa worth 15 million isk.

Here's the bottom line. It's not really about whether gigX shouldn't be permabanned or whether all the miners should be. The use of the permaban is itself a controversial topic. The mighty CODE. alliance is home to a large number of ethicists. (If ethics were nukes, CODE. would be EVE's sole superpower.) Some say that all bans should be temporary, because permabans deprive a player of the chance--however small--to someday get right with the Code. Others argue that it's good when CCP permabans unrepentant carebears because it increases the Code-compliance quotient of highsec.

Regardless of where you stand on permabans, it's clear that highsec carebears should be held to the same standard as everyone else. They shouldn't be subjected to the soft but poisonous bigotry of low expectations. If an alliance leader can withstand the loss of his stations, territory, isk, etc., then a carebear should be expected to endure the loss of his 30 million isk Retriever without violating the EULA. In fact, one of the reasons why highsec carebears behave so poorly is precisely because they're not held to a higher (i.e., human) standard.

We do the miners of highsec a great honour (undeserved, to be honest) when we expect them to behave like normal people.
Posted by MinerBumping at 19:02