Peering into the Soul, Part 1

Agents of the New Order perform countless vital services for the people of highsec. One of the most important--judging them. 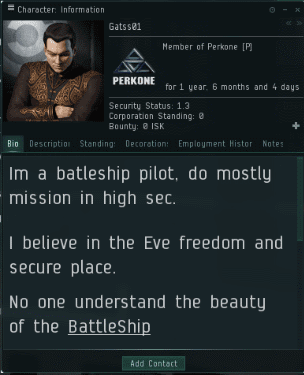 Agent Slutzilla came across a Retriever pilot and checked his bio. Our hero began to judge the miner. New Order Agents are capable of making incredibly accurate snap decisions, but they're also really good at conducting thorough investigations.

Slutzilla questioned Gatss01 about his bio and how it seemingly conflicted with his choice of ship. 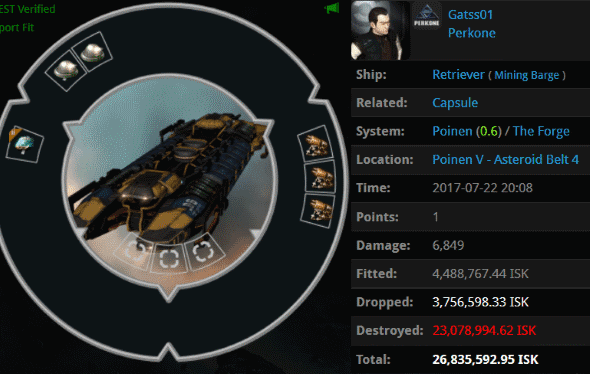 Luckily, Gatss01 didn't remain in his Retriever for too long. After Slutzilla ganked him, our hero also relieved the miner of a pod worth 100 million isk.

The miner didn't have a particularly good attitude about experiencing his first real taste of EVE since returning to the game. I guess he didn't miss the game that much.

Gatss01 had read his termination mail and followed the link to MinerBumping. The miner didn't go directly to the Code, however; he simply read whatever post was first on MinerBumping's front page that day. Confused, he sought additional info from Larsulrik. 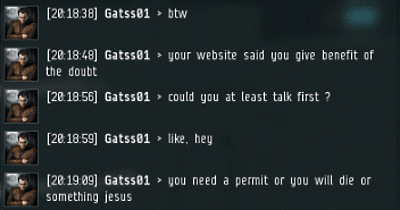 Now, dear reader, we get to the real meat of today's post. Put yourself in Agent Larsulrik's shoes. Do you think Gatss01 will buy a mining permit, or will he run away screaming? 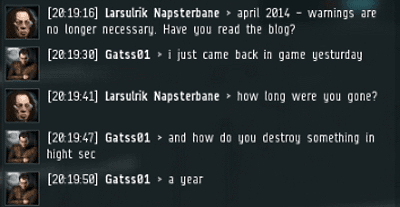 As I said, Agents have the task of judging the miners they encounter. First they must consider whether the miner can be persuaded to buy a permit. And if so, will the miner will actually honour the permit? 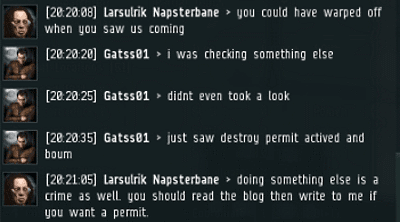 Gatss01 was offering a lot of the typical carebear excuses for his misbehavior. That's a bad sign. On the other hand, Gatss01 was at least willing to engage with the material. In fact, Gatss01 quoted MinerBumping:

After a little prompting, Gatss01 expressed interest in the benefits of a mining permit. Perhaps our Agent was going to make a sale after all. 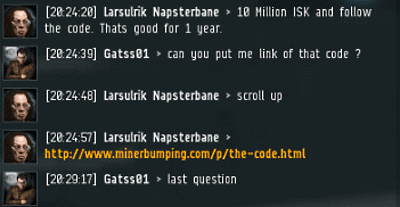 When a miner starts talking like this, a permit purchase is very likely. He simply wants to do his due diligence before investing the 10 million isk. 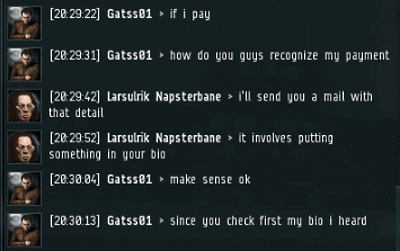 Gatss01 was encouraged by what he heard from Larsulrik. Everything matched up with what he knew about the way the New Order operates. For example, he knew that Agent Slutzilla had read his bio (with the battleship reference) before ganking him. 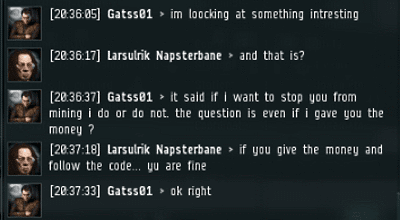 Things were going smoothly. But again, dear reader, put yourself in Larsulrik's shoes. Can you tell whether Gatss01 was a Gallant-aspirant... Or was he merely a Goofus willing to part with 10 million isk?

Next time, we'll find out the answer.

To be continued...
Posted by MinerBumping at 17:19