In the Code era, every day is a nice day. Welcome to the 150th edition (so many editions--will the miners ever stop crying?) of the Highsec Miner Grab Bag!

My Russian is a little rusty, but I'm pretty sure Bob the Fourth is the good guy in the story being told here.

From one of the newbie help channels. First, we see a "helpful" veteran spreading anti-Code propaganda. But then...

jenna watkins was killed by a "code squad". Actually, 31 gankers from the mighty CODE. alliance isn't just a squad; it's an armada. To answer your question, jenna, it appears your Obelisk was triple-anti-tanked. Meditate on the Code as you come up with a better way to transport your stuff. 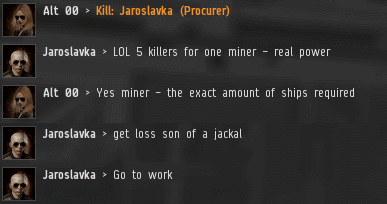 "If you use a Procurer, they can't gank you." 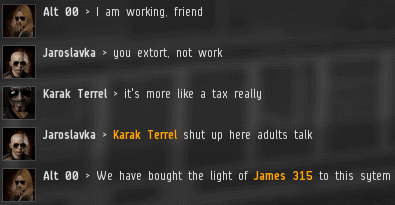 It's funny to hear miners like Jaroslavka complain about gankers not working hard enough. As if AFK mining in highsec takes a lot of effort. Then again, these are the same guys who complain about ganking not being risky enough, all while shooting defenseless asteroids under the umbrella of CONCORD's protection.

Once we create a perfect highsec, even the dullest miners will see it was for their own good. Therefore, the faster we kill them, the sooner they'll like us.

People have been trying to impersonate me for many years now. You know how you can tell if someone is the real Saviour of Highsec? Watch him closely, and see what effect he's having on highsec. If he's saving highsec, then he's the real thing.

Someone named Cochise Chiricahua was caught distributing mass EVEmails to people killed by the mighty CODE. alliance. Was Cochise sending them valuable information about how to obey the Code? Uh, not exactly: 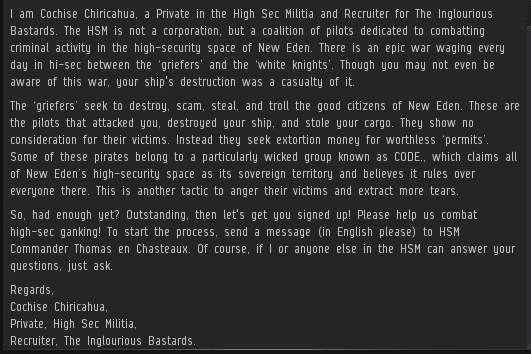 It must suck to be ganked by CODE. First you lose your ship, and then you get a bunch of spam from the Anti-Gankers. Strangely, Cochise talked about an "epic war" taking place between the gankers and his carebear militia. The gankers killed 2 trillion isk last month. What did the carebear militia do, other than fail? Sounds more like a massacre than a war.

We have one of these: The Code
Posted by MinerBumping at 19:10