I'll assume this miner was talking about CONCORD. Otherwise, that would be crazy--just crazy enough, in fact, for another edition of the Highsec Miner Grab Bag!

tankgiirl and Shady Skoomasha were ganked together by our Agents. Then they shed tears together. 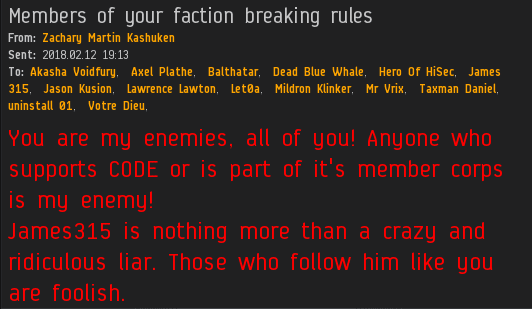 Even without the giant red font, Zachary Martin Kashuken is wrong here. Everyone knows that a bot-aspirant is his own worst enemy.

Among the many problems with "Gank-Intel": The "intel" gatherers end up getting ganked themselves: 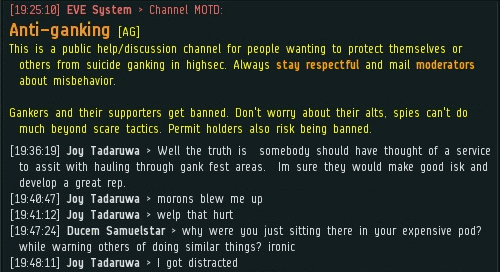 There are so many reasons why we say the Anti-Gankers have no intelligence.

Seems like Google Translate must've eaten this miner's message. Google probably processes as many miner tears as CCP does.

If you're mining in highsec and your name is illegal, that's probably a bad sign...

illegal joined EVE in 2004. I don't know how many times this character changed hands or its owner quit, but getting ganked in a Hulk isn't much to show for 14 years.

I'm sorry, you must have me mistaken for someone else. 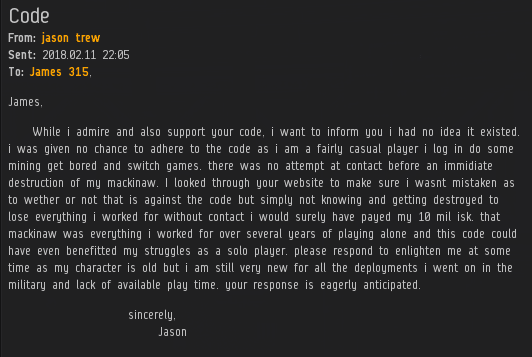 If jason trew's EVEmail is to be believed, it took him 7 years to grind enough isk to buy a Mackinaw. At PLEX exchange rates, that amounts to less than $1 per year. jason, I think it's time for you to try the Code.

The New Order saves another new player! The anti-Code crowd must have terrible stomach problems from eating so much crow.
Posted by MinerBumping at 19:01