Agent Lewak had an Atron-class frigate and an itchy trigger finger. What to do? Go on a roam in low/null? Ask someone if RvB is still around? 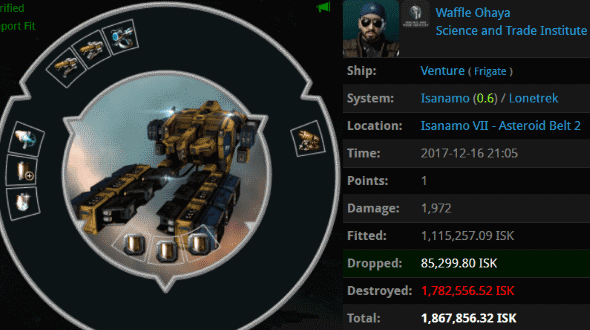 No, Lewak used his ship to enforce the Code. He ganked a Venture. A frigate for a frigate, which seemed fair. Lewak sent the pilot, Waffle Ohaya, an EVEmail about the Code.

Waffle didn't write back--but someone else did. 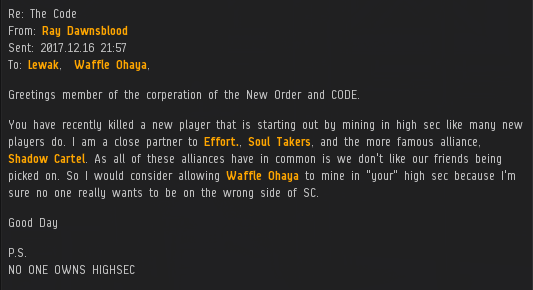 Ray Dawnsblood entered the scene. For some reason, he took up Waffle's case. Maybe Ray was supposed to be intimidating on Waffle's behalf, but Ray himself had to invoke the names of other alliances. How were they all connected? All Lewak did was gank a guy named Waffle. It was like a "powerful friends in nullsec" version of six degrees of separation.

Shadow Cartel, one of the alliances listed, did not appear to have any connection to Ray. I've heard of Shadow Cartel. Their stats are okay, but certainly nothing like those of the mighty CODE. alliance. They fell far short of the 2 trillion mark last month.

Agent Lewak told Ray that if he was a true friend to Waffle, he'd buy the little guy a mining permit. Lewak was testing Ray for signs of bot-aspirancy and carebear tendencies. If Ray wouldn't even spend 10 million isk to help his friend, that would reveal what his priorities really were.

Ray fancied himself the whitest of white knights. Who were these "protectors" anyway? Some Anti-Ganking group that managed to stay off the radar? Ray continued:

Like so many other theme parkers we've encountered, Ray claimed to champion the cause of new players. Waffle actually was new, but Ray wouldn't give him any isk. His only "help" came in the form of rants via EVEmail.

Ray questioned the motives and dedication of the Saviour of Highsec. Classic projection.

The "protector" finally wrapped up his EVEmail. He urged sympathy and compassion for new players--but he drew the line at opening his own wallet for them.

Lewak penned a brief reply. He suggested that Ray must be new in highsec if he didn't know about the Code. Also, CCP has definitively proven that ganking new players doesn't make them quit. This small dose of truth triggered another rant.

Ray gnashed his teeth about newbies quitting. Yet the young miner kept his silence. Why couldn't Waffle speak for himself? 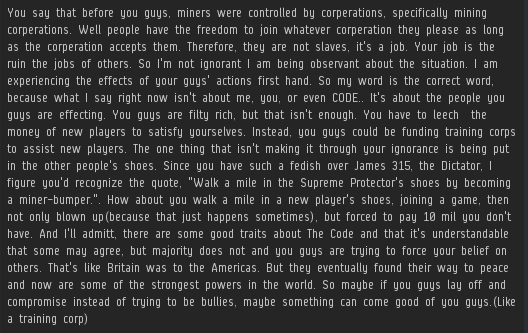 Ray had his own vision for what CODE. could become: A training corp for new highsec miners. This, among other reasons, is why I'm the Saviour of Highsec and he's not.

I mentioned before that although Ray liked to name-drop, he didn't seem to have any authority to speak on their behalf. So who was this guy? 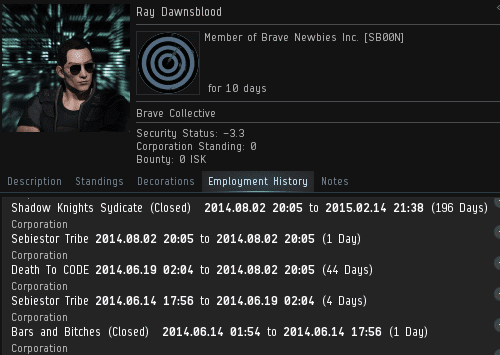 In fact, Ray didn't belong to any particular corp or alliance for very long. One particularly suspicious entry in his employment history: A 44-day stint in Death to CODE.

Amusingly, even a corporation dedicated to our destruction manages to be another one of those "we take anyone and we do a little of everything" corps. Like Ray, these people have nothing and no one to guide them. They'll never get anywhere until they learn to follow the Code.
Posted by MinerBumping at 18:20