Xan Staraider turned his life around, abandoning his misspent youth as an Anti-Ganker to take up Catalyst and Code. Agent Xan hoped to share the benefits of the Code with non-compliant miner Thorin Hammerfield--only to run afoul of Jelly Heed, a practicing anti-Code rebel.

Despite her best efforts, Jelly had failed to stop Xan from ganking Thorin Hammerfield. Now she wanted someone to blame.

Jelly was convinced that Semaj Cay Erquilenne was secretly working for the New Order, instead of AFK mining like he was supposed to. 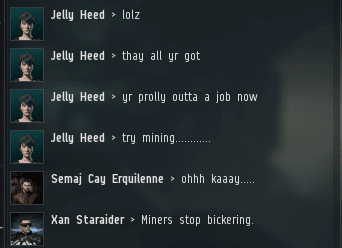 Xan swiftly resolved the dispute. He didn't want any distractions; he preferred to spend his 15-minute criminal timer quietly preparing for the next gank.

Miners always complain about not being warned, so Xan offered a warning to every miner in the system. But Jelly was making preparations of her own. She'd failed to stop the last gank, and she had no intention of being humiliated again. 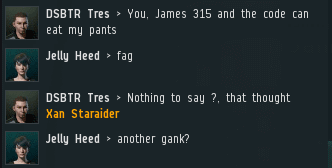 Xan undocked and launched his Catalyst back into the field of battle. Now was the moment of truth. 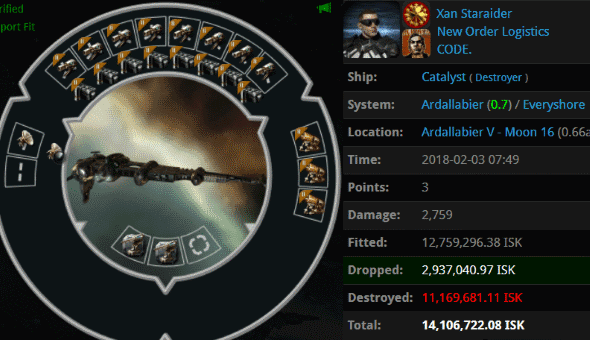 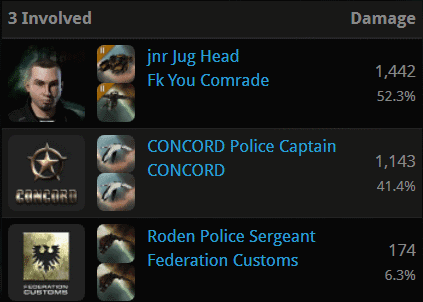 The Catalyst had been attacked by the drones of a Skiff piloted by Jelly's alt. However, the presence of CONCORD on the Catalyst lossmail was telling... Prior to exploding, the Catalyst had destroyed its target. Once again, Jelly failed to prevent the gank. She was as much of a failure as all of the other Anti-Gankers. 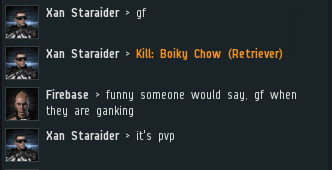 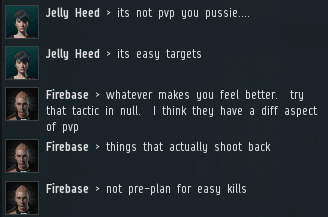 Jelly stewed. She'd sworn to herself that she'd never be humiliated by Xan Staraider ever again. Yet here she was. 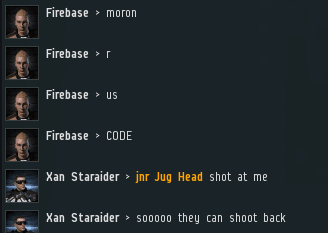 Fellow anti-Code carebear Firebase tried to support Jelly by pulling the old "ships that can't shoot back" line. Because Jelly's alt had fired upon Xan's Catalyst, Firebase only made things worse, by drawing further attention to the Anti-Ganker's failure. Jelly winced. 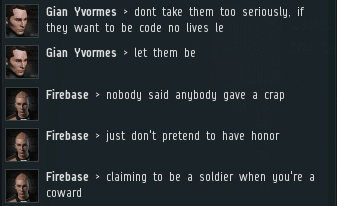 Firebase calmly raged in local. He was so indifferent to the situation that his hands trembled and his eyes turned red. Smoke contentedly shot out of his nostrils. 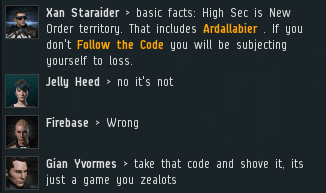 Xan looked upon the rebels with pity. He used to be just like them. There was no need to make a confession; his own history wasn't the important thing. The Code was. Jelly and her fellow rebels insisted that disobeying the Code wouldn't result in losses. Xan knew better--and so did everyone he killed.

After his 15-minute timer expired, Xan returned to the ice field. Incredibly, the pod of the Retriever he'd just ganked was still sitting there. So the Retriever pilot lost 100 million isk worth of implants, too. Where were the rebels who just moments ago had declared the irrelevance of the Code? Nowhere to be seen.
Posted by MinerBumping at 18:35