If You're Lyin' You're Dyin'

In the New Order era, highsec carebears are required to be honest. But Carlos SirAHno hoped that he could save his hauler with lies. 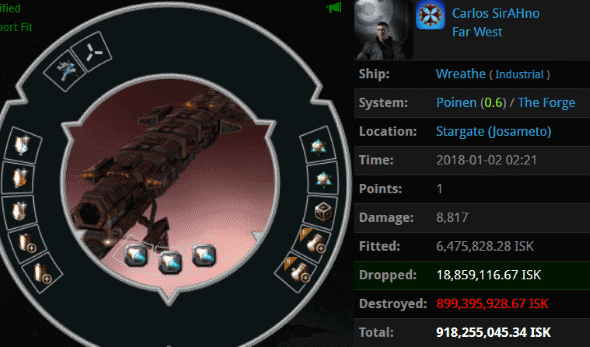 In the New Order era, only the Code can save your ship. Carlos and his fail-fit Wreathe experienced Agent Ralliana's judgment.

And as you can see from the Wreathe's cargo, Ralliana's was a righteous judgment.

It was good that Carlos wasn't AFK, even if he used his keyboard for telling lies. It meant he was able to escape with his pod--so the busy Poinen system got a chance to banter with Carlos a bit. Rock star that she is, Ralliana played to the crowd.

Then our Agent began to test the miner. She wanted to see whether Carlos was willing to change his ways--or if he was an inveterate liar, incapable of telling the truth.

Carlos had a perfect opening to lie about being someone important in EVE. He could've talked about his powerful friends, or his deadly alts. Instead, he admitted that he was a nobody. Good for him.

Carlos inspected his lossmail and discovered that Ralliana had been assisted on the gank by one Luna Nightblood. He reached the dramatic conclusion that they were both members of the mighty CODE. alliance! 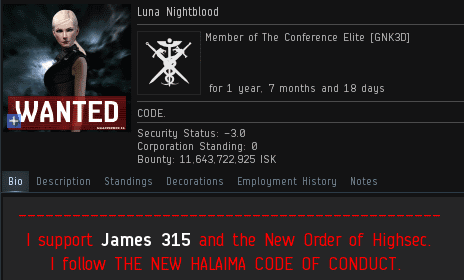 At this stage, it's unclear how Luna's cover was blown.

Must be Military Intelligence, then.

After his encounter with CODE., Carlos was a changed man. Having realized that he himself had lied when the pressure was on, Carlos now suspected everyone around him of harboring secrets. 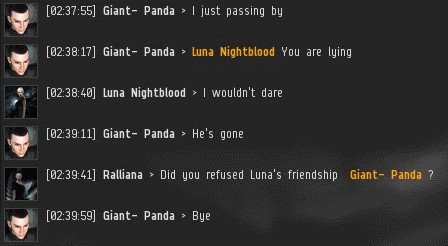 Carlos did not attempt to enlist the aid of random passersby. Anyone could be an Agent. Half of highsec could be working for the New Order! One day, though, in highsec's glorious future, people won't need to lie or worry about undercover Agents. Because when the day of Final Victory comes, everyone will be working for the Code.
Posted by MinerBumping at 19:02