Over One Trillion Five Hundred Seventy-Four Billion in Shares Sold

Who cares about new players these days? Only the New Order of Highsec. Pretty much everyone else treats them like garbage. Not us. 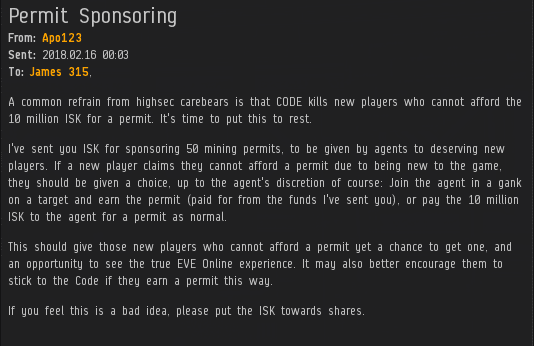 This is a great idea--and more evidence that the newbies' only true friends are the people who kill carebears. Apo123 sent me 500 million isk to be used as a fund for helping new players earn permits by ganking miners. Wonderful!

The only problem is the method for sending isk is a little too convoluted: Apo123 sends money to me, then I send it to the Agent who requests it on behalf of the miner who gets the kill who would otherwise send it to the Agent... The result is one Agent sending isk to another, with me as an intermediary. I've decided to simplify the process by treating this as a share purchase. When a newbie ganks for the New Order, he can request reimbursement from the Treasury like any other Agent. Voilà!

Apo123 therefore purchased an additional 500 shares, which took us past the 1,574 billion isk mark and earned him another Supreme Protector's Tip of the Hat™. A fine reward for a fine deed.

Agent Australian Excellence and his colleagues at the Gate Tax Collection Agency have been patrolling the highsec trade lanes to help clear them of unlicensed freighters and jump freighters. But do the carebears approve of this service? Se0Hor lost a 19.8 billion isk Anshar and was asked for his opinion.

Se0Hor kept his composure at first, but he quickly began to betray signs of poor sportsmanship.

Shockingly, the Code-violating carebear accused our Agent of violating the EULA. He was forced to retract his accusation when Australian presented indisputable proof of his innocence.

It can be difficult to make carebears see reason--they're so unused to seeing it. Still, even a bot-aspirant freighter can make a lovely explosion... 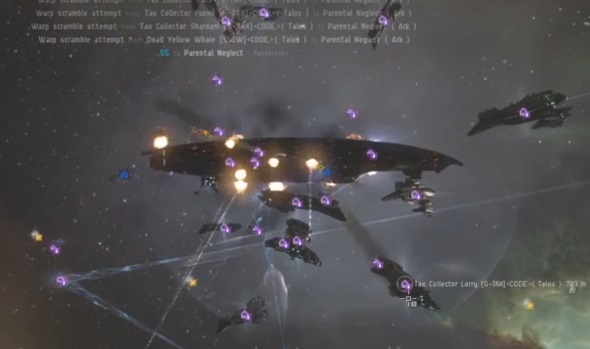 Streamable Video
Parental Neglect was filmed losing his 11.5 billion isk Ark. Code violations are ugly, but the wrecks of the violators are pure art.
Posted by MinerBumping at 18:08