The Rules of Engagement

"WTF"--also known as the "carebear hello". 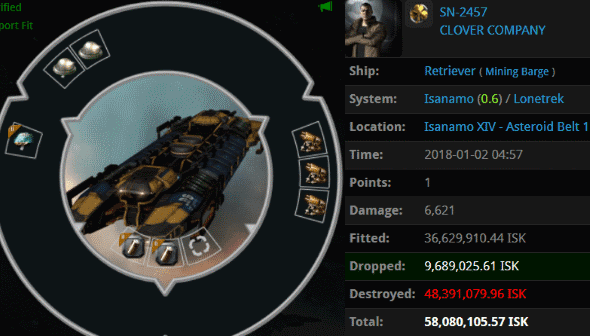 And this is how we say hello in the New Order. 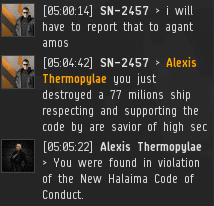 Plot twist incoming: Upon being ganked, SN-2457 announced that he was a permit-holder, threatened to report the ganker to the Agent who sold the permit, and proclaimed his allegiance to the Saviour of Highsec. Agent Alexis Thermopylae wasted no time in declaring the miner in violation of the Code. Just like that, the battle lines had been drawn. 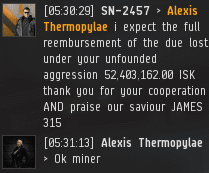 SN-2457 wanted to go on record in front of everyone in Isanamo local. The miner dug in his heels. After all, digging is what miners do. 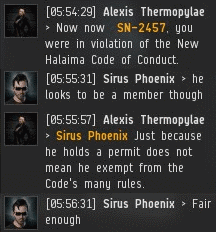 Agent Alexis didn't sweat the miner's accusations; she knew that it was a good kill. But the commotion in local chat attracted attention. Everything about the New Order attracts attention, because we're what's going on in EVE these days. 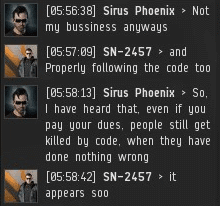 Then SN-2457 made the fateful decision to become a martyr. He tried to turn the destruction of his Retriever into some larger point about the Code. It was pure propaganda. Would this miner succeed in deceiving highsec? 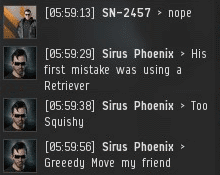 Alexis had caught the miner red-handed. He'd been mining in a fail-fit, untanked Retriever. And by all indications, he'd been AFK, too. Worse yet, he lied, openly challenged the authority of an Agent of the New Order (a member of the mighty CODE. alliance, no less), and tried to smear the Code. 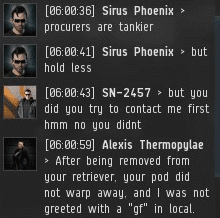 Interestingly, the locals weren't giving SN-2457 any sympathy. Remember the old days, when any random onlooker would immediately side against the ganker? How things have changed. 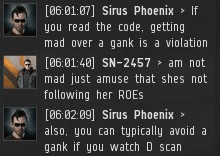 One of the reasons for the shift is that the Code is fundamentally a part of highsec culture now. EVE players know about it, they read it, and they take it as a given that it will be enforced. 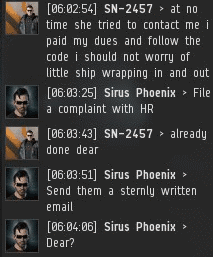 SN-2457 grew frustrated as he realized he wasn't gaining any support from the locals. He began to lose his composure, letting his "Gallant miner" mask slip. 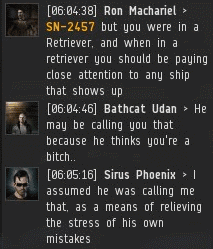 Ultimately, the locals all turned against SN-2457, one after another. It's remarkable: They watched a permit-holder get ganked, they considered his conduct, and they correctly judged him to have been in violation of the Code--and to blame for his own loss. There's a word for that: Progress.