Beautiful on the Inside, Too

Agent Lawrence Lawton broke up a criminal enterprise involving an unlicensed Hulk and its Mammoth accomplice. In fact, let's have a look at that hauler: 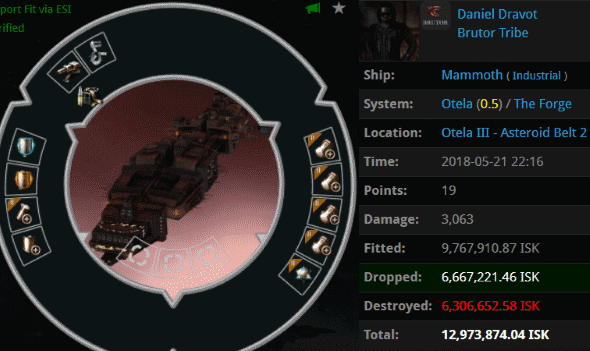 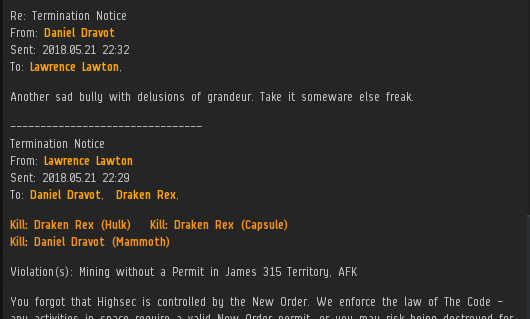 Still radiant from the glory of his victory, Agent Lawrence sent a reminder to the carebear not to be so bad at EVE (at least while in New Order territory). The hauler pilot, Daniel Dravot, bristled.

Lawrence again reminded the miner about his obligations under the Code. Terrible Mammoth fit notwithstanding, Daniel has been playing EVE since 2010. He should've known better.

It soon became clear why Daniel was incapable of learning the game: He didn't accept the legitimacy of the outcome of PvP engagements. If someone killed him, that merely reflected poorly on the PvP'er in real life. Our Agent wanted to educate the miner further, but considered that Daniel might be the sort of fellow who's quick with the "block" button.

The miner expanded upon his earlier theories. Apparently he believed that anyone who doesn't pilot ridiculously awful Mammoths must be morally bankrupt.

Lawrence wasn't buying what Daniel was selling. Lawrence already had a fully formed philosophy for playing EVE: the Code. And unlike Daniel's philosophy--which only results in embarrassing lossmails--the Code actually works. 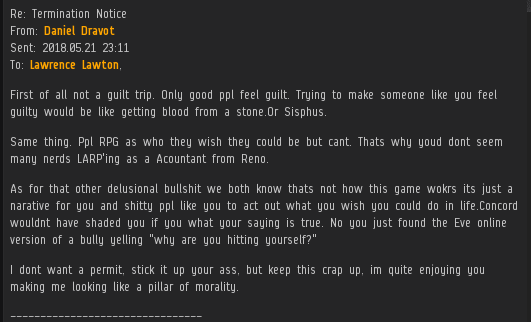 Daniel wouldn't budge. As time went on, he became more convinced of his own rightness. The better someone is at EVE, the worse they are. The miner could take pride in how bad he was at EVE. Daniel was freed from the inconvenient burden of performing good deeds to prove his character; all he had to do was put together a trash-fit hauler in a video game.

The miner explained away the whole "PvP in a PvP game" concept. No one was supposed to fire upon his vessels. Not if they didn't want a stain on their soul. Agent Lawrence saw things very differently--and was able to cite his freshly won killmails as support for his own view.

Daniel wasn't quite able to figure out why the lack of sovereignty mechanics matters for highsec but not for lowsec. His mind was busy with other things, anyway.

According to Daniel, being shot at in a spaceship-shooting game was the best thing that had ever happened to him. If he ever harbored any doubts about what a great person he was, his e-martyrdom in an Otela asteroid belt was enough to dispel them.

If true, though, Daniel should've been perfectly happy to lose another ship. But was he? 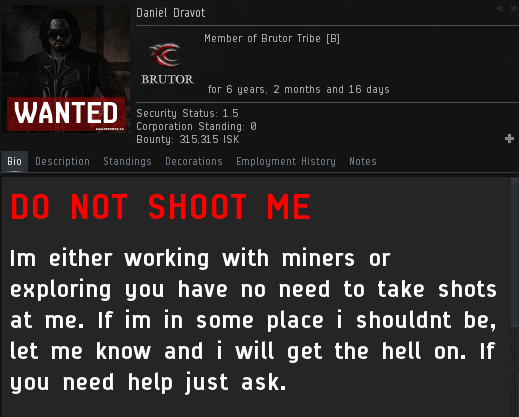 In lieu of purchasing a New Order mining permit and proudly presenting it in his bio like a normal person, Daniel came up with something completely different. Will it keep him safe? Unlikely. But if he loses another ship, maybe he'll win a Nobel Prize.
Posted by MinerBumping at 18:13