Previously, on MinerBumping... Miners in the Niballe system were, as usual, focusing all of their attention on Agent Bob the Fourth--even while he was AFK. Before long, a conspiracy developed. Anti-Code miners vowed to stop Bob and keep each other safe.

The newest member of the conspiracy, NOmadS0uL, took the lead as soon as he entered the system.

NOmadS0uL recognized Bob from one of his previous adventures. The miner sought to win the respect of his fellow rebels by mocking our Agent.

Miners are typically intimidated by the presence of an Agent. But as the conspiracy grew, they felt more confident that they had safety in numbers. They found it empowering to defy Bob's authority.

The rebels chatted about whether they should try to destroy Bob's ship. They were quite casual about it, too. It was as if they didn't know that Bob was the most elite PvP'er in the system.

Agent Bob didn't bother using words to persuade the rebels to change their attitude. In this case, actions would be much more effective. 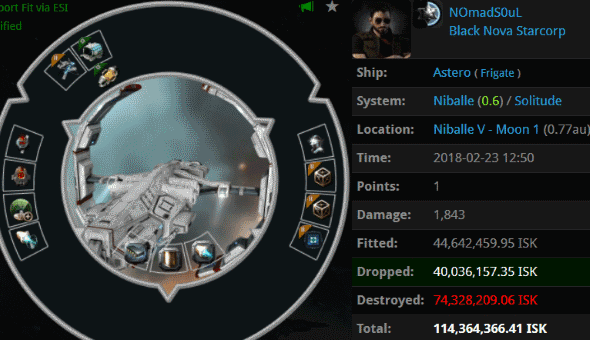 Bob popped back into the system to snipe NOmadS0uL's Astero. None of NOmadS0uL's co-conspirators made the slightest effort to rescue him.

The miner underwent a sudden change of heart. He became one of those helpless "new returning players" we hear so much about these days. (Though his story doesn't line up with how he recognized Bob from the Kino system.) 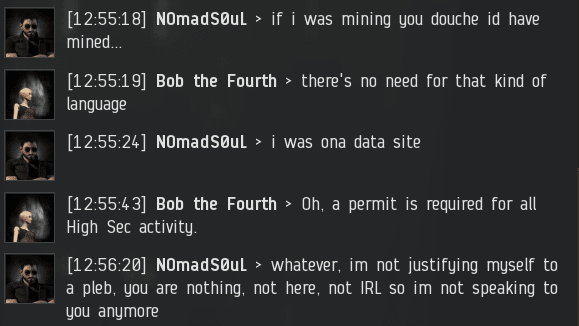 The miner decided he wasn't having fun in EVE anymore. And he'd lost his taste for conversation. 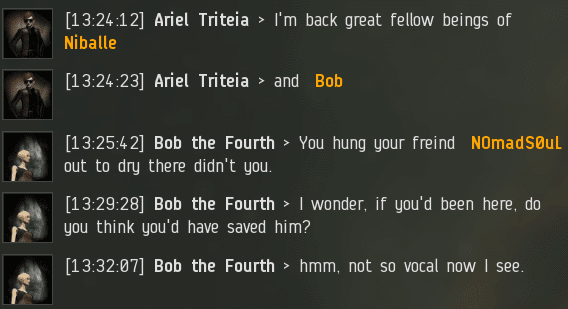 The formerly chatty rebels were nowhere to be seen. Apparently the conspiracy had disbanded in a hurry. 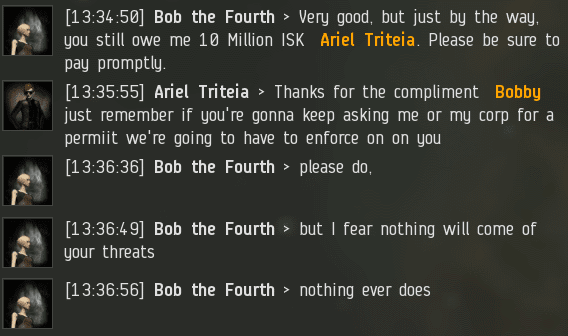 Ariel Triteia made a token effort to save face, but the rest of the rebel gang didn't show their faces. Niballe had attempted to revolt against the Code, and the system had been chastened for it. All they had to show for their defiance and arrogance was a lossmail.