Pushed Out of the Nest 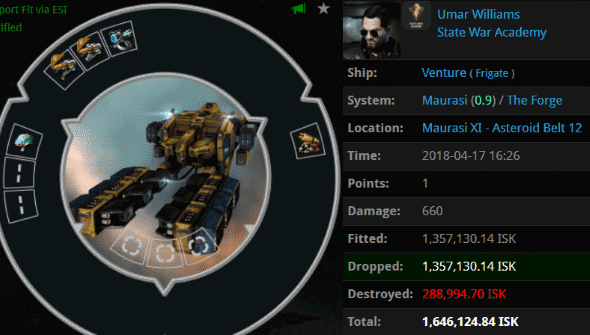 Only two days after he started playing EVE, Umar was busy violating the Code. This did not endear him to Agent Mack Poddington, who caught the young miner engaged in illegal activity. As a warning, Agent Mack ganked Umar and told him to stop. 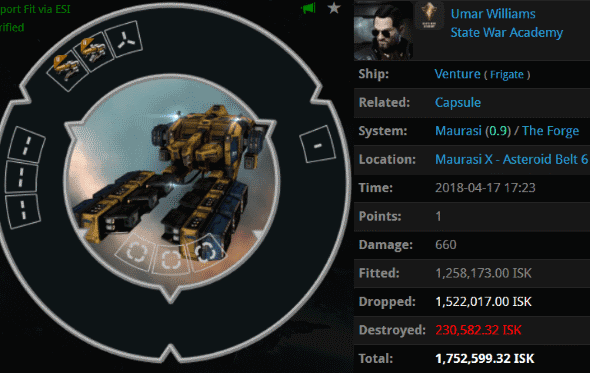 He didn't stop. Less than an hour later, Agent Lawrence Lawton discovered Umar mining in the same system. Umar had an even more pathetically fit Venture. It seemed that this miner was not a quick study.

Only after being ganked the second time did Umar realize that he wouldn't be allowed to violate the Code. He'd simply be ganked again and again, indefinitely.

The miner denied that he'd been AFK, of course. Despite being so new to the game, he was a practiced liar.

What's lower than a "retard"? A bot-aspirant, for one. Or a Goofus. Agent Lawrence had just met Umar, but his judgment of the miner was rapidly headed in that direction.

The newbie was too unfamiliar with the Code to even attempt to make the false claim about warnings being required. Many rebel miners try to cite this "phantom" provision. Even so, Umar still demanded that Lawrence ask him whether he was AFK before ganking him. How can we explain this? It must be some sort of highsec miner instinct.

Umar couldn't believe that someone would want to shoot someone else's spaceship. He wasn't cut out for EVE.

The miner was caught in yet another lie. Apparently he wasn't aware that Lawrence and Mack are as close as brothers.

According to Umar, the loss of the second Venture (1.7 million isk) prevented him from being able to purchase a 10 million isk permit. Time to go begging in Jita, I guess.

Agent Lawrence suggested that the miner get a fresh start. But Umar seemed determined to whine his way to success.


Umar Williams > Well I didn't know that, I'm new to the game and you didn't give me any chances or pointers saying that "Hey you need a mining permit to mine here"
Lawrence Lawton > Mack poddington told you and yet you came back in another venture to the same spot.
Umar Williams > I did not know it was rthe smae spot use you brain and look at the last sentance "I'm new to the game"

Next, Umar insisted that he didn't know he was mining in the same location where he'd previously been ganked. Maurasi X-6 is not a long journey from Maurasi XI-12, though.

The miner moaned that he wasn't receiving enough help from the "fucking cancer" and the "cunts" he so despised. Even if that were true, it's not as though anyone else is volunteering to do the New Order's job. Where was Anti-Ganking during all of this, anyway?


Umar Williams > Sacrcasm you retard are you sure you don't need to go back to school, maybe proper school this time tho
Lawrence Lawton > better use /s if you want to be sarcastic in text. Otherwise people will just assume you're stupid like every miner.
Umar Williams > Or maybe people could use theior brain I refer you ro "I'm new to the game"
Lawrence Lawton > Why would you join the PvP game where nobody is safe anywhere and then go mining?
Lawrence Lawton > with the expectation of safety and being "left alone"? That's not what EVE is about.

I wonder what EVE's marketing team is up to these days. I suppose I don't have the right cookies to get banner ads like "Sign up for EVE Online, be safe and AFK forever!"

CCP needs to add a "debate" section to the tutorial. These miners get crushed in every argument they have with our Agents.

Our Agent concluded by inviting the newbie to explore other areas of the EVE galaxy. Since Ventures were originally designed for non-highsec mining, it's not like Umar didn't have the right equipment for it.