No Matter What the Cost

A question, and a response--though not the one she was expecting:

While Julia Cardelante was lounging in the Anti-Ganking channel, she posed an absurd question about the mighty CODE. alliance. She was rewarded with the "Mark of 315", a bounty placed by someone whose alt was monitoring the conversation.

Julia freely admitted that she had no intention of making any real effort to oppose the New Order. Typical Anti-Ganker? 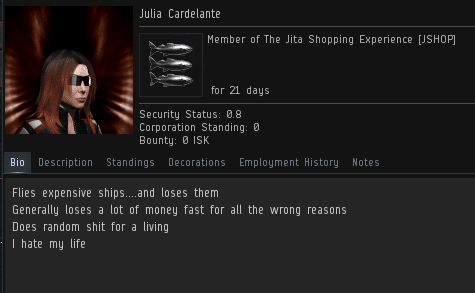 Placing small bounties on mouthy carebears is a good way of encouraging them to engage with EVE on some level. The bounties also notify the bounty-placer when the carebear has lost a ship. Said bounties tend to evaporate quickly, as was the case with Julia. 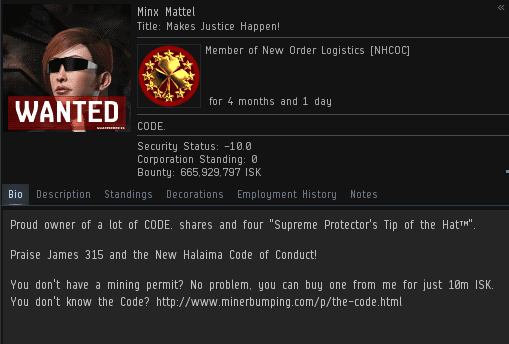 Though Agent Minx Mattel's confidential informant alt was the one investigating the Anti-Ganking channel, Minx herself placed each of the bounties. That's because whenever you receive a bounty, you can see the identity of your benefactor. All the Anti-Gankers knew Minx was behind the Marks of 315.

Minx took a particular interest in Adallia Ataria, who bragged about kill rights. Adallia responded to her with a threat.

Unimpressed thus far, our Agent wanted to hear something more substantive from Adallia. Was she really the Code-beating warrior she claimed to be?

Adallia, unlike Julia, couldn't admit that she was unable to fight the New Order. Minx asked Adallia for some evidence to back up her claims.

Short on evidence, Adallia nevertheless redoubled her bravado. She'd destroy everyone in CODE. and everyone aligned with them.

When Minx asked what Adallia meant by "no matter the cost", the rebel mumbled something about kill rights.

Our Agent would not receive a clear answer that day. So she watched the killboards. 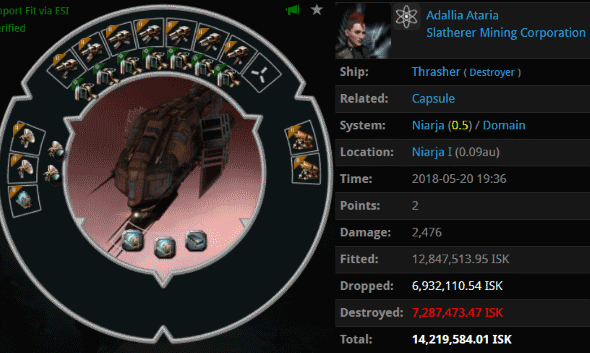 Minutes later, Adallia lost a Thrasher, apparently while attempting to engage in some sort of Anti-Ganking activity in a popular ganking system. Agent Minx concluded that 14.2 million isk was the "cost" Adallia was willing to pay. It might not seem like much, but it's about 14.2 million isk more than most Anti-Gankers are willing to part with. Later, Adallia seemed to have a change of heart. She joined Goonswarm Federation, began ganking highsec miners, and purchased 200 million isk worth of New Order stock. The drudgery and misery that necessarily comes with the life of an Anti-Ganker, it seems, was a mucher higher price than she was willing to pay.
Posted by MinerBumping at 18:30