You Can't Spell Toxic Without an X

Who has a problem with "James followers"? The bad guys, that's who. 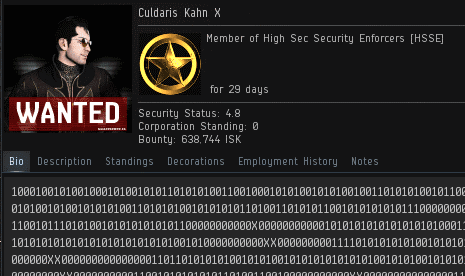 Meet Culdaris Kahn X. He's an Anti-Ganker, which tells you most of what you need to know about him. Even among his fellow Anti-Gankers, he is known for being toxic. That's not good.

(Failed on both counts.)

Anti-Gankers rarely get along with anyone, but those who choose to inhabit the toxic environment of the Anti-Ganking channel get used to each other eventually. Somehow Culdaris managed to become notorious for being toxic, in a place where it's exceptionally difficult to stand out for that reason.

Since Anti-Gankers tend to be similar, they generally don't earn a reputation outside the channel--unless they have a funny origin story that got recorded on MinerBumping prior to their joining the channel.

Culdaris and his behavior caused enough disgust among enough of his fellow rebels that word began to reach our Agents. Agent Lawrence Lawton was particularly curious about the rumors that Culdaris had been caught making real-life death threats. He decided to investigate. Luckily, Culdaris was available for a quick interview.

Lawrence dove right into the heart of the matter. Culdaris denied the accusations by insulting the mighty CODE. alliance. That's not an effective way to make a denial, by the way. Innocent people don't usually go ranting about the government after they get charged with a crime.

Nevertheless, Lawrence gave Culdaris the benefit of the doubt. He tested the rebel by using a well-known litmus test: Invoking the name of the Saviour of Highsec. The results were conclusive.

Culdaris revealed that he held a personal grudge against me. As far as I can recall, I haven't interacted with him before. I suppose he must actually have a problem with the Code, then--and I can't help him with that.

Lawrence tested the miner yet again. Culdaris continued to fail. No wonder this guy is so unpopular.

Our Agent revealed to the troubled rebel a different path: His list of confiscated bling and the billions he'd made from them. Culdaris ignored it. Even wealth could not tempt him to improve his behavior.

Our Agent was genuinely curious as to why an Anti-Ganker would bother to persist in their failures day in and day out (and in some sad cases, year after year). Culdaris couldn't explain it.

The truth was, Culdaris himself probably couldn't understand why he tried (and failed) to oppose the New Order. Something was broken inside the rebel. Only the Code can fix it--if anything can.
Posted by MinerBumping at 18:15