In EVE, it is said, you should never trust anyone--except an Agent of the New Order. When isk4trade went running around in a Rattlesnake under an active kill right, he ended up getting himself captured and held for ransom. Given the value of his ship, he felt he had no choice but to hand over the money. 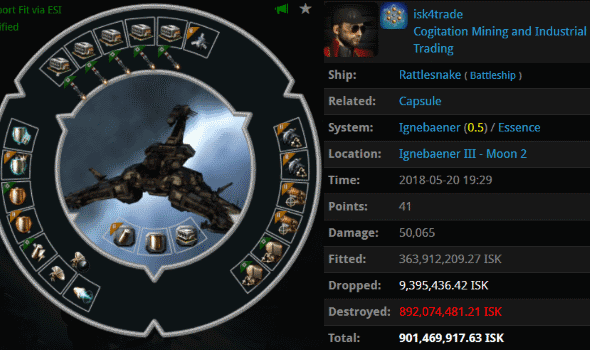 He was killed anyway. Thanks to the kill right, Agents medsouz, Tuomas Arturi, and Instated One were permitted to destroy the Rattlesnake without CONCORD's intervention.

Agent Krig Povelli wasn't able to join in on the kill, but he was there for the aftermath.

The carebear was furious. He felt he'd been scammed. Though scamming is common in EVE, he certainly didn't expect to be ripped off by a duly authorized Code enforcer.

At first, it might seem as though an Agent actually did scam someone. The "victim" always makes it seem that way--until all the facts come in. 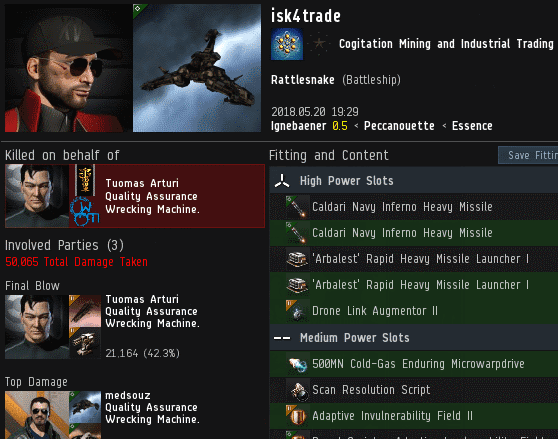 In fact, Tuomas Arturi owned the kill right that had been used. And it was he who had the right to be paid the ransom. isk4trade made a ransom payment without following the instructions, and we all know how that sort of thing plays out.

isk4trade was quickly losing faith not only in Agent Krig Povelli, but in the entire system of highsec law.

Most people assume that highsec carebears are a bunch of children with impulse-control problems. Our Agents hold them to a higher standard than that.

Although isk4trade had already paid 450 million isk (or was it 650 mill?), he still owed Agent Krig a debt of 10 million. The miner balked. That would be throwing good money after bad.

Though isk4trade refused to admit to mining, he belonged to a corporation with "mining" in its name. A corporation, by the way, that he'd belonged to for over 7 years. Oops!

For the briefest moment, isk4trade actually contemplated purchasing a permit. After all, what was 10 million isk compared to the ransom and the Rattlesnake?


isk4trade > we have exactly 20 members
Krig Povelli > So that is 200 mil. if you want a permit for each of them
isk4trade > If I pay you ... who is to say someone else is going to say I should have paid THEM ?
Krig Povelli > I will give you the permit info to put in your BIO for each toon

As our Agent explained, 10 million isk wouldn't cover everyone in the corp. Now isk4trade was looking at a 200 million isk price tag. Every instinct told him not to pay it.

Then again, if he did pay, at least this time there wouldn't be any confusion about the designated recipient of the isk.

The carebear sighed and opened his wallet. It's a familiar-sounding sigh. 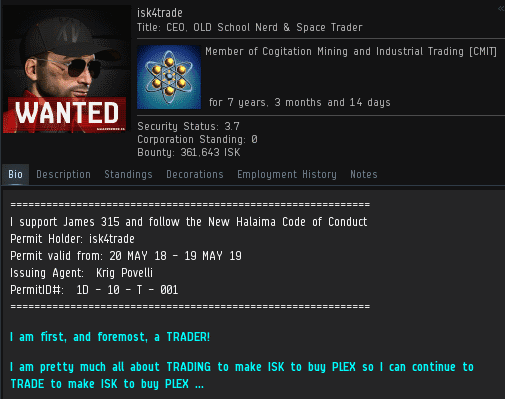 Until every man, woman, and child in highsec obeys the Code, those sighs will continue to echo throughout New Order territory.


isk4trade > now canyou leave me alone to have a heart attack now? I am honest to god 67 years old IRL
isk4trade > if you screw us over .... I will go on SUCH a campaign to make sure every player on EVE knows that your permits are useless .... I promise!
Krig Povelli > http://www.minerbumping.com/p/the-code.html
Krig Povelli > ^Make sure you read the Code
Krig Povelli > And follow it

Rebels and skeptics like to say that a New Order mining permit is useless. Their smear campaign doesn't stop people from buying them, though.


isk4trade > I hear you .... make sure you live up to your promises
isk4trade > I havent had time to have a PISS
isk4trade > leave me the hell alone for a bit ?????
Krig Povelli > You have my permission to use the bathroom

Nevertheless, as we all know, the purchase of a mining permit is but the first necessary step toward compliance. We can only hope that a new permit-holder is smart enough to continue walking the path.
Posted by MinerBumping at 18:00