Some miners are particularly wicked. 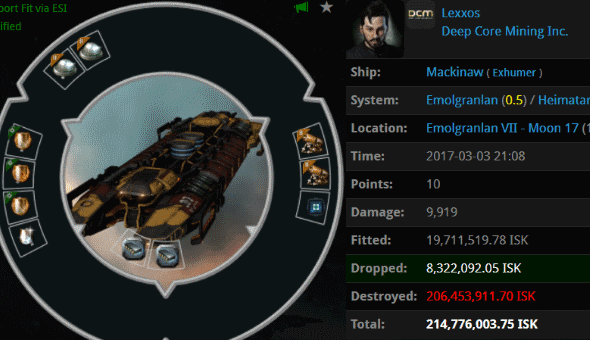 Lexxos was mining in an unlicensed Mackinaw when he was struck by Agent Alt 00 and one of her friends. The good news for Lexxos was that his ship was well tanked against the Catalysts, and it survived the attack. The bad news? His ship then undocked--still heavily damaged--and resumed mining. Thanks to the damage, the Mackinaw did not survive the second attack. 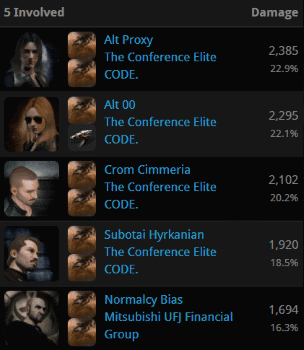 A few weeks later, Alt 00 spotted Lexxos again. This time, she brought a gang of Coercers, which deal a different damage type. They sliced through the Mackinaw's anti-Catalyst defenses.

Days later, Lexxos was back in action--in the same system. Our Agent was becoming increasingly efficient at killing him.

March rolled into May. Alt 00 returned to the Emolgranlan system and saw Lexxos doing the same thing over and over. She fried more of his Mackinaws. 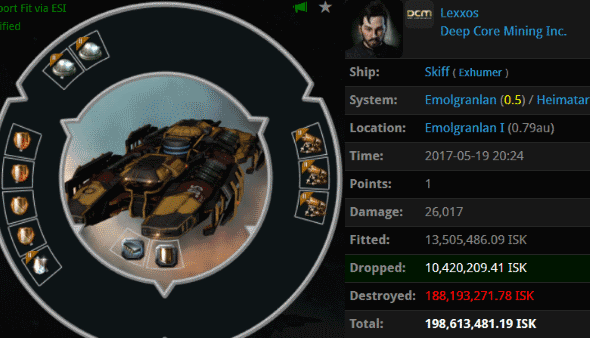 Later, Alt 00 chanced upon Lexxos in a Skiff. Apparently he'd finally gotten the message. Our Agent delivered him a new message: Even a tanked Skiff cannot save an unlicensed miner.

Spring turned to summer. In June and July, Alt 00 and company visited Emolgranlan. Lexxos continued to repeat his mistakes. Alt 00 reflected upon the miner's strange behavior during their first encounter, when Lexxos undocked in a damaged ship and went back to mining like nothing had happened. By now, she was convinced that Lexxos was a bot.

Other miners in the ice field reacted with alarm when Alt 00 entered Emolgranlan. Not Lexxos, who predictably perished.

Nothing gets miners talking like the New Order and its Code.

Alt 00 told the miners not to waste their sympathy on Lexxos--they had a bot in their midst. But some doubted.

These miners were slow to learn. They knew enough to fear the mighty CODE. alliance, but they didn't know enough to embrace its teachings.

(In fact, miners who are merely bot-aspirants and not bots are well aware of the sins of those who share the ice field. They give the EULA-violators aid and comfort by allowing bots to mine alongside them, for there is safety in numbers. I have always had a strong dislike for this characteristic of the bot-aspirant miner.)

Alt 00 wasn't interested in proving Lexxos' guilt to the other miners' satisfaction. The more important truth was that all of the unlicensed miners were guilty.

The miners were too afraid to undock and return to the ice field, but they rattled off threats in local. Our Agent was content to debate the miners while waiting out her aggression timer. But the miner she really wanted to speak to was the one who remained silent: Lexxos himself. What would it take to get an honest conversation with a bot?