Over One Trillion Five Hundred Ninety-Four Billion in Shares Sold

The New Order of Highsec continues to stack up victory after glorious victory. This week, Apo123 purchased 370 additional shares of New Order stock, which brought us past the 1,593 billion isk mark and earned him a Supreme Protector's Tip of the Hat™. But our Agents weren't done yet.

The Lawton School for Pubbies Who Can't Mine Good bought 1,000 more shares of New Order stock, triggering the victory of taking us past the 1,594 billion isk mark. That's a lot of stock, by the way. The School added another Supreme Protector's Tip of the Hat™ to its collection.

But is there a need of such a school? There is. In the New Order, our institutions aren't isolated from the people; you can't characterize them as ivory towers. Our Agents deal not only in theory, but reality.

Here's a typical example. Agent Lawrence Lawton brought gankers from his School and ganked a miner--triggering other miners in the system.

The ganked miner, Erik Rebar, lost a 378 million isk Hulk and was podded for good measure. 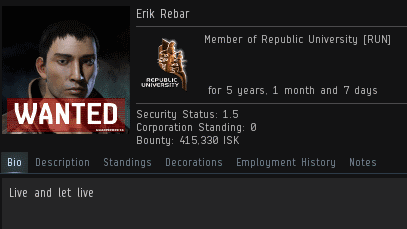 The offending bio. Erik's philosophy was but a smokescreen for his true desire: a risk-free highsec.

Lawrence began to use Erik as a teachable example. The miner himself had not yet spoken, but others of his rabble were roused by his death.

Finally, Lawrence got Erik on the line. The miner was salty about something, and Lawrence aimed to find out what.

Our Agents understand that miners need more than death; they need to accept that their deaths are deserved.

Erik bristled. He knew he'd never be able to mine AFK in peace. He might get away with it for a time, but he'd always have a fear of Catalysts looming over him. He wouldn't be able to enjoy being AFK.

Yes, the highsec miner needs an education. And the best way to educate them that we've found so far is destroying their stuff and giving them the Code.
Posted by MinerBumping at 18:30