Uh oh, you know what that means--it's time for another edition of the Highsec Miner Grab Bag!

You might be wondering what Shalise Learin lost that prompted her to make the real-life threat in the previous EVEmail...

It was a Retriever worth 23 million isk. I'm sure that surprises no one.

Sped Sotken hinted that he was considering making a false report to CCP to get revenge for his lost ship. Other carebears are more explicit:

I guess Joel Blackwood didn't have much faith in the ganker fleet's coordination. They must be cheating if they can all shoot him at the same time.

As any cardiologist would tell you, getting ganked is good for your heart. Even better--ganking someone else. 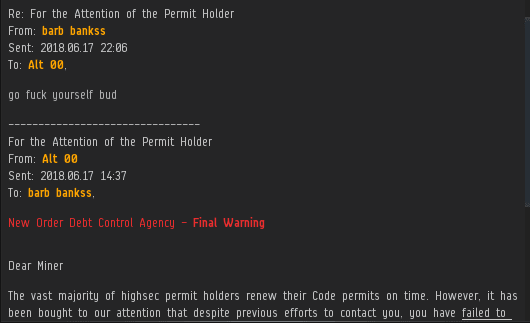 As Agent Alt 00 observed, carebears are increasingly making heart-related excuses for their Code violations. Another sign of an aging playerbase.

Bot-aspirants blame our Agents for everything: The decline in the EVE population, inflation, you name it.

Miners love to say that they're not afraid of our Agents, though, so how can we be terrorists? The miners aren't being terrorized, right?

Anyone want to place a bet on Metro Audeles' native language?

zag orsky wasn't at all upset about losing a ship; he's simply hostile and belligerent toward everyone he meets.

...In fact, a lot of miners say they're not angry about their losses. Maybe they all just hate everyone? It's odd that a bunch of ill-tempered misanthropes would consider themselves the "good guys" in EVE. 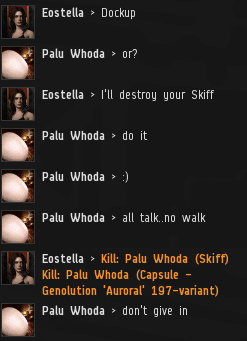 In the anti-Code resistance, the ship-less miner is always the one leading the charge, for he has nothing to lose.
Posted by MinerBumping at 18:09