It all began with an investigation into this man: 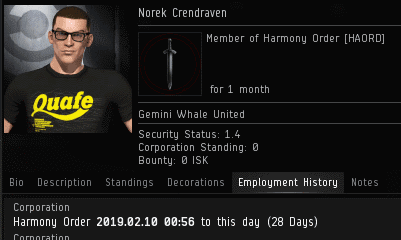 Norek Crendraven was a member of Harmony Order, a corporation known to harbor bot-aspirant miners.

Last month, a carebear named chrissty spilled a bunch of salt after losing a ship. Harmony Order promptly expelled her from the corp. Was Harmony Order involved in a clean-up... or a cover-up?

Agent Aiko Danuja was aware that Harmony Order was already under investigation. However, when she met Norek, she felt it was necessary and appropriate to open another investigation. 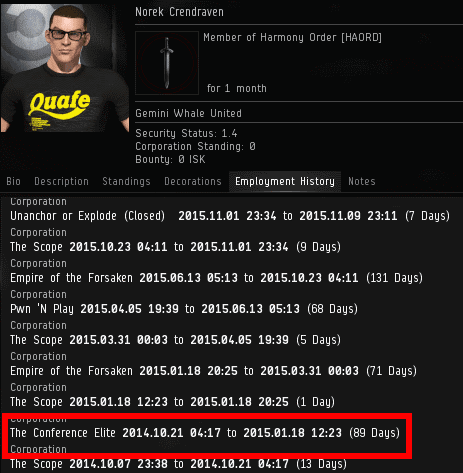 Buried deep in Norek's employment history: About three months in The Conference Elite, a member corp of the mighty CODE. alliance.

Norek did not hesitate to inform on his fellow corpmates. Though the interviewee was outwardly cooperative, Agent Aiko remained on her guard.

Norek waxed nostalgic about the strong ethics of CODE., circa late 2014 to early 2015. It was a different time. Things were so much simpler then.

The investigation had already borne fruit, and now it appeared that it might produce something else: a smoking gun. Norek claimed to be sitting on evidence of misconduct by members of CODE.

Norek began to multitask. Even as he combed through his logs, he did some name-dropping and burnished his credentials as the ultimate CODE. insider.

Additional Agents chimed in. Everyone was eager to see the proof behind Norek's explosive allegations. They also hoped to sell some permits.

At the last moment, the star anti-Code witness recanted. What happened?

Aiko always suspected that something was rotten in Harmony Order, and now she was sure of it. But our Agents had no idea just how deep the corruption went.