Previously, on MinerBumping... Harmony Order corporation became the subject of multiple investigations by Agents of the New Order. Agent Aiko Danuja conducted an interview of one of Harmony Order's members, Norek Crendraven, who was also a former member of the mighty CODE. alliance. When asked about his views on the Code and Harmony Order, Norek seemed ambivalent at best.

Norek had claimed to possess evidence that Agents of the New Order were abusing their authority. When pressed, he had no choice but to retract the accusation.

Earlier, Norek admitted that other members of Harmony Order were bot-aspirants. This was sufficient grounds for breaking out the Red Pen. 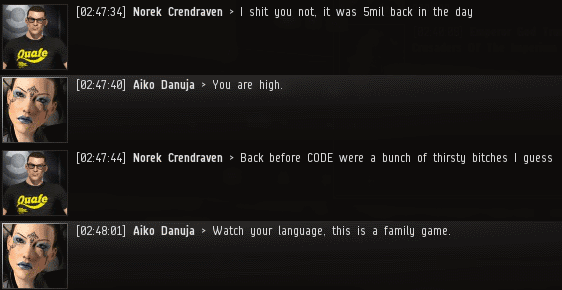 Once the subject of isk came up, Norek was no longer able to hide his true feelings. His mouth became a fountain of heresies. Five million isk for a permit, eh? Must've been before my time.

Norek's status as a "Former Fan" was confirmed. There was little chance that he would persuade his corpmates to buy permits. Which meant that Harmony Order would need help from the outside. 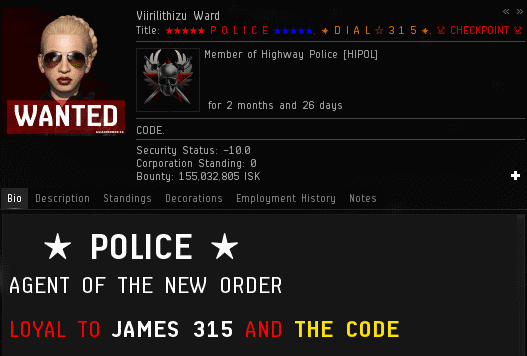 Agent Viirilithizu Ward was already conducting her own investigation of Harmony Order on behalf of Highway Police. And her excellent police work was paying off. 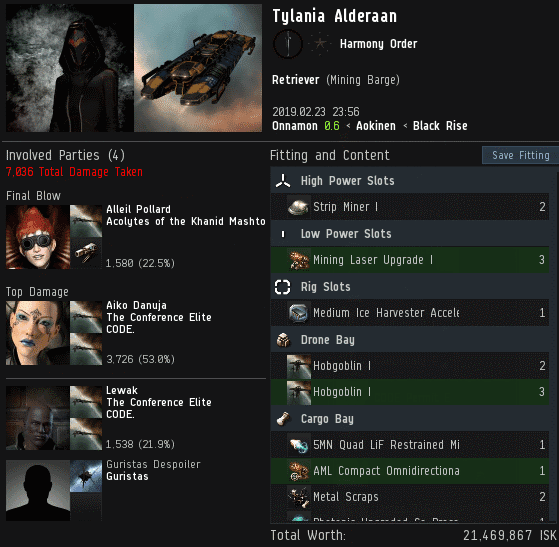 Highway Police detected unauthorized mining activity in the Black Rise region. An all-points bulletin went out, resulting in the destruction of a Harmony Order Retriever.

Every miner gank is an opportunity for a miner to reclaim his humanity. Would Tylania Alderaan embrace it?

The miner refused. It seemed apparent that Harmony Order's culture was corrupt to the core.

Agent Viirilithizu was confident that at least some portion of the miners would see reason. Just as she was giving an inspiring speech in local, word came in from another region of highsec: 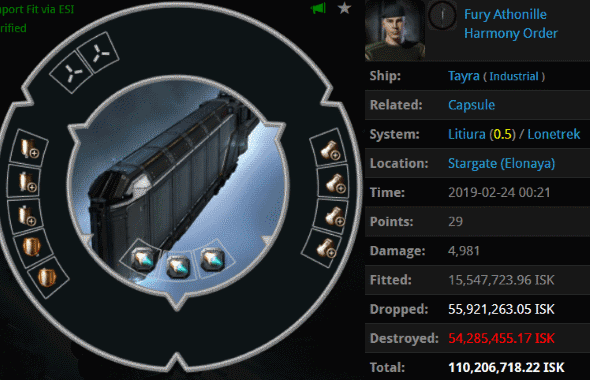 In Lonetrek, Agent Eva Mavas ganked a Harmony Order hauler and the pilot's 363 million isk pod. Viirilithizu decided that the situation had escalated to the point that an official notice was required. 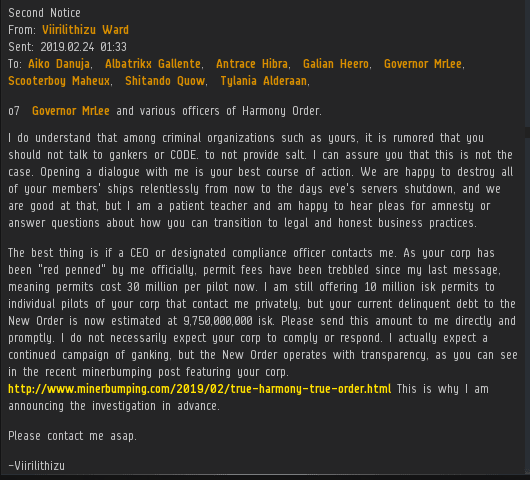 Before the investigations began, a member of Harmony Order had been booted from the corp for spilling salt to an Agent. Viirilithizu considered that the corp's leadership might be attempting to isolate its members by forbidding them to speak with Agents.

In a supremely humane act, our Agent anchored warning containers near a station known to be a dwelling place of Harmony Order members. If Harmony Order was indeed attempting the "ignore them and they'll go away" strategy, things could go very badly for the corp's members.