Get Your Head in the Game

A highsec miner's dilemma: Remain silent and be thought an AFK'er--or speak and remove all doubt that you're a Goofus? 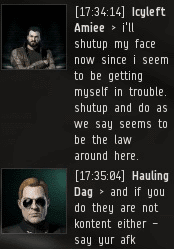 A pair of miners reflected on this conundrum. 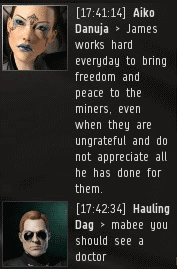 One of the two miners, Hauling Dag, has struggled to find his place in highsec.

One day, Hauling Dag busied himself by mining in a Skiff. Try as he might, the miner couldn't avoid putting his foot in his mouth. 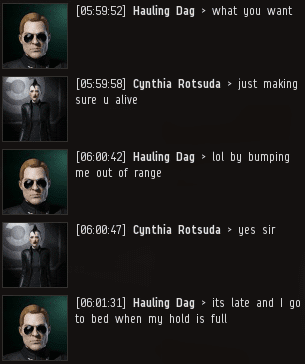 Agent Cynthia Rotsuda arrived in the system, eager to sharpen her bumping skills. She was pleased to see that she had no difficulty bumping a Skiff. Hauling Dag was now unable to mine.

The miner was also no longer able to maintain his silence. He had, effectively, been pulled over for questioning. Whether he liked it or not, his EVE time--which he'd planned to spend mining--would be spent conversing with some Agents of the New Order.

Back in January, Hauling Dag ended up on a Kills of the Week post when he lost a 2.2 billion isk pod after his Hulk was ganked. Agent Aiko Danuja warned him that he could risk further ganks if he didn't mind his P's and Q's. 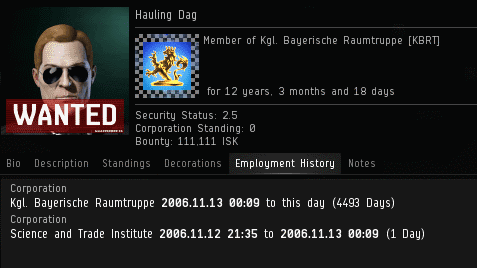 Cue the Anti-Gankers complaining about the harassment of a "new player".

Hauling Dag and his alt, Dag1, found themselves engaged in a lively conversation. The miner had admitted to zoning out and nearly succumbing to sleep. He needed to get his head back in the game. Our Agents are authorized to stop a miner from mining if they suspect that he's in need of a reality check. That's what friends do for each other--and you'll never have a friend like an Agent of the New Order.

Fully awake, the miner tried to debate with our Agents. How long until he lost the debate? Five, four, three, two...

On some level, Hauling Dag perceived that the Agents were a positive influence on him. 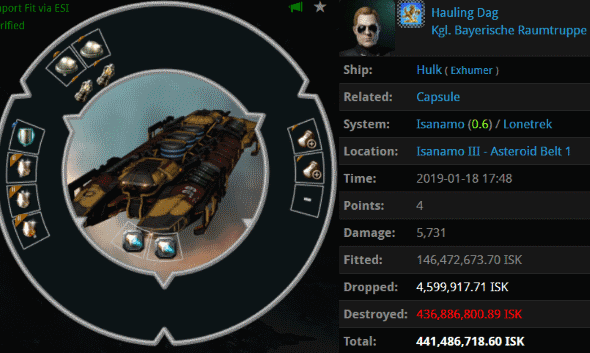 After all, who would want to spend his life flying ships like this?
Posted by MinerBumping at 18:03