Every Apology Begins with a Crime, Part 2

Previously, on MinerBumping... Agent Alt 00 was in the process of helping Haze Tveskoeg get his permit renewed when it became clear that the miner still held a grudge about the loss of a ship from 2017. Worse yet, these feelings were causing Haze to utter inappropriate comments about the New Order. 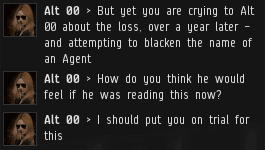 Agent Alt 00 made it clear that if Haze was still troubled by the old gank--to the point that he couldn't acknowledge the legitimacy of the Code enforcer's action against him--there would be consequences.

Alas, Haze spurned the lifeline and made another careless remark.

Haze Tveskoeg was now officially on trial. Miners, if you get put on trial, make sure to show up a few minutes early. Our Agents' time is valuable--the most valuable time in highsec, in fact.

Haze's feeble body got the best of him.

You'd think that Haze would've at least hired a space lawyer to represent him, but no--he slept through the whole thing. AFK defendants are as helpless as AFK freighters. 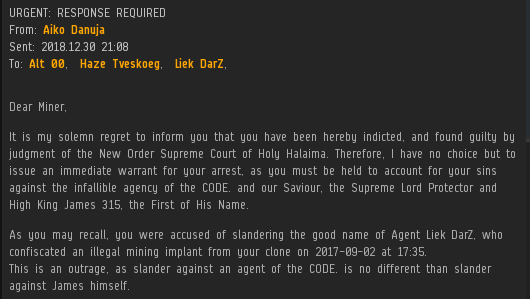 Luckily, Haze was given due process, which meant that he received an EVEmail notifying him of the verdict.

Unlike anyone else who could attempt to lay claim to highsec, the New Order really is in charge. Our Code has teeth because the Agents who enforce it are able to stop miners from mining. Haze's recklessness in local chat--and the negative thoughts that inspired it--would cost him. His permit was officially revoked. 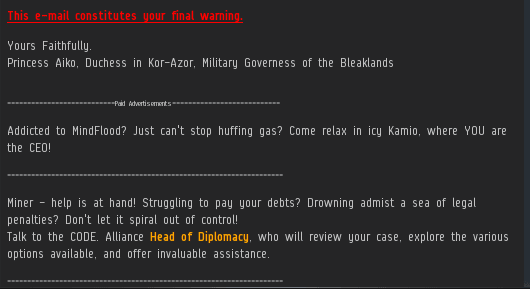 Haze hadn't even been ganked, and he was still guaranteed to lose 30 million isk. Welcome to life on the Red Pen list.

A lot of rebel miners are defiant when told to pay money to the New Order. But Haze had already tried being defiant, and our Agents always beat him. It simply cost too much to resist the Code, especially when there was no hope of getting away with it. The miner surrendered his money without complaint.

As part of his rehabilitation, Haze was eventually required to go on an apology tour via EVEmail. So that's how this ended up in my inbox! 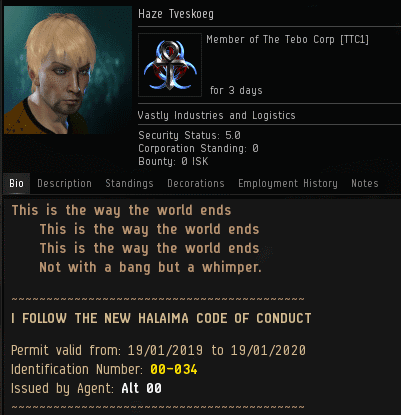 And that's the basic dichotomy of highsec. Miners, you can either praise me now or apologize to me later. Which will you choose?
Posted by MinerBumping at 18:04