The few remaining "Anti-Gankers" show up, too. Not to have fun, of course; mostly they just whine about their failures.

"Why didn't they do a better job of organizing a resistance?" you ask. "They've known about it all year. Multiple years if you count their past years of failure." I suppose the answer is that they were too busy. They were preoccupied with non-stop failing daily continuously all the time--and Anti-Gankers are notoriously bad at multitasking.

And yes, it happened again:

Last month, a ruse was posted on the official EVE forums. If this sounds familiar, it's because your memory goes back two years:

A similar Ruse Kruise was posted back in 2017. 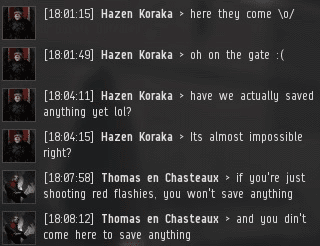 As usual, the resistance effort--such as it was--disintegrated into backbiting and recriminations. The Goblok squad fails again!
Posted by MinerBumping at 18:08